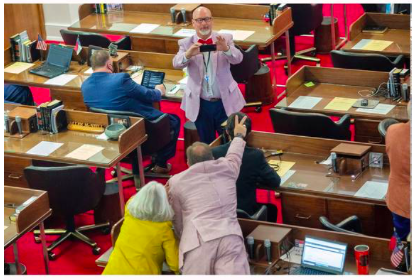 While we’re sheltering-in-place, the honorables have once again darkened the halls of that big building one Jones Street in Raleigh. The Congress passed a huge-honking spending bill. So, the honorables in Raleigh felt like they had to get in on the act.

The House passed $1.7 billion in spending, while the Senate went with a more modest $1.4 billion:

[…]The $300 million difference between the two chambers, however, underscored two different philosophies on what to do with the money, which is cash given to North Carolina from the federal government as part of the CARES Act.

“This is federal money that under current law needs to be spent this calendar year,” Speaker Moore explained to ABC11. “I think you go ahead and spend as much money as you can right now and go help folks.”

In an interview earlier this week, Senate President Phil Berger told ABC11 that he thinks lawmakers should pump the brakes and wait for more guidance from the federal government, which he expects will give more flexibility to how North Carolina can spend that money.

“One of the concerns we should all have is whether or not we’re going to have the resources into the next fiscal year to cover the ordinary things we expect our state government to do,” Berger said.[…]

Berger has a point here.  With all of the layoffs and business closings thanks to Roy’s lockdown,  you can expect incomes and therefore tax revenues to be lower in the coming months.  The honorables will likely not have as  much to play with in the next budget year.  Slowing down and seeing how things play out might be the smarter move.

[…] “What we hope to be able to accomplish is to shepherd or to hold on to some of those federal dollars to help us bridge those gaps when we get into the next fiscal year so we don’t end up with a situation like we had in 2009-2010 where teachers got laid off and we had to freeze salaries,” Berger said.

The lengthy bills from both chambers do fund several shared priorities: COVID19 testing, contact tracing, medical research, rural hospitals, transportation and education, among many others. Again, the divide appears to be on the amounts.

“I appreciate the bipartisan, bicameral collaboration among my colleagues in the General Assembly to respond with relief for North Carolinians whose lives are at risk in this public health crisis, and whose livelihoods hang in the balance of an economic shutdown,” Moore said.

There are some policy differences too, including on education.

“The school calendar law is very controversial and now that a lot of tourism hot spots like the beach and mountains have lost part of their spring and maybe summer, they’re fighting back school starting early next year,” Rep. Darren Jackson, D-Wake County, the House Minority Leader, explained to ABC11. “I think there are some policy differences around when can school start, how many extra days, how much remediation days, whether those days will be in person or digital.”

Where lawmakers all agree, though, is on anticipating several return trips to Raleigh for further legislation responding to the coronavirus.

“We’ll be back here in weeks,” Speaker Moore said. “The ripple effect of this virus, health-wise and the economic impact. We don’t know all of those yet.”[…]