In budget reconciliation talks, the Senate has backed away from their insistence on dropping teacher tenure in exchange for pay raises. 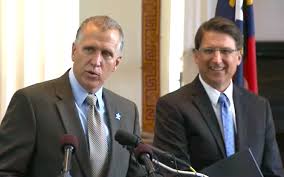 Smelling blood, Gov. Pat, Speaker Thom, and the drive-by media are pushing for even more:

[…] School superintendents from the Charlotte-Mecklenburg school district as well as Cumberland and Dare counties said the cut to teacher assistants would cost hundreds of jobs in the bigger districts and hurt the schools’ ability to meet the requirement that most children read at grade level before being promoted to fourth grade.

House negotiators asked them to speak Wednesday during the hour of morning negotiation time that the House controlled. Senate Republicans objected, saying speakers other than budget negotiators were not allowed unless agreed to by both sides.

“This isn’t your committee meeting,” said Sen. Harry Brown, chief budget negotiator for his chamber, told Rep. Nelson Dollar, the chief House negotiator. “You decided you were going to be the rule maker of this committee. The Senate isn’t going to allow that to happen.”

Dollar said it made sense to have public input during public meetings.

Gov. Pat McCrory, weighed in on the walk-out Wednesday afternoon while speaking at a meeting of his education cabinet at Shaw University.

“I was extremely disappointed that members of the Senate walked out on our superintendents and our teachers,” McCrory said. “I don’t think that’s the appropriate 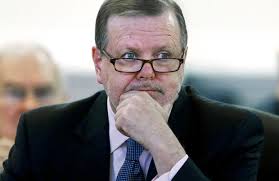 The testimony has already happened during all of the pre-floor vote committee hearings.  Conference committees are all about the two chambers ironing out the differences between their respective pieces of legislation.  Opening up these discussions to the public is great.  But public testimony in this process is unprecedented.  There had been no agreement with the Senate.  Speaker Thom and his boys just did it.  There is no media outrage over acting outside of the rules. Why?  House Republican leaders are pushing the big government line favored by the media and their Democrat allies

More from the drive-bys:

[…] The Senate proposal would eliminate funding for more than 7,000 assistants in second and third grades. The House keeps the funds. The Senate wants to spend unused teacher assistant money on higher teacher pay raises than the House offered. […]

Ah.  We’re STILL pushing the meme that Phil Berger and Jerry Tillman are personally deciding whether Miss Smith at Flat Rock Elementary School will get a classroom aide. In reality, legislators budget a bundle of money based on requests from the public education sector.  Mad about personnel decisions? Talk to your local superintendent and school board.

Let’s check out what the educrats’ personnel decisions have wrought:

[…] The problem with education spending in North Carolina is not that there’s too little money to go around, however. The state spends approximately $9,000 per student, which is well below the national average of $13,000, but well above the lowest-spending state, Utah, at $6,000. Multiply that by the ratio of teachers to students in North Carolina, which is a teacher-pleasing one to just below fourteen, and you get $126,000 per teacher to spend. That’s more than enough for a nice salary and benefits package, especially in the school districts around Raleigh, which spend an extra thousand or two per pupil above the state average.

So where does the rest of the money go? Well, there’s overhead. And boy, do North Carolina schools have overhead. For starters, North Carolina schools employ almost as many school administrators as they do teachers. The ratio of students to administrators is 1 to 15. While student enrollment increased 36 percent between 1992 and 2009, the number of non-teaching school staff increased almost twice as much: 61 percent, according to the Friedman Foundation. If administrative growth had just matched student enrollment over those years, every teacher could have received a $5,650 pay hike every year.

Some of this astonishing bureaucratic growth can be attributed, as in this Harvard University study, to a lack of market pressure on schools. Study coauthor Eric Hanushek says schools typically don’t make tough but necessary financial choices because they don’t lose money or market share for bad financial or educational management, unlike private enterprises.

As if to reinforce Hanushek’s point, Raleigh-area Durham County schools spent $3.5 million in federal Race to the Top (RTT) funds not on teacher salaries, but on iPads. You know, the same tool Los Angeles schools will spend $1 billion on but can’t figure why? Technology may be cool, but its record of improving K-12 education so far is, at best, spotty. […]