There were a lot of headlines celebrating an alleged agreement between House and Senate leaders on a new state budget.  The magic number?  $21.735 billion.    This number has both chambers closing the difference between them by meeting roughly in the middle. There had been a $700 million difference between the GOP-led House and GOP-led Senate.

I talked with a few GOP House members who are less than thrilled with how the whole situation has been handled.  Said one, who also happens to be a committee chairman:

”It’s nice this number was released to the press. But the question I and a lot of other members have is: how do we get there?  What gets cut back or eliminated?  They’re talking about finalizing it all by August 31.  We haven’t seen any kind of game plan or any kind of numbers indicating how we’re going to proceed.  I don’t see how this is going to happen. ”

Another House member described the situation on Jones Street in a manner akin to the intro to the classic TV comedy ‘Soap’:

”We’ve got a destination, but no idea how to get there.  Most of our members are wishing we’d just gone home in July.  But now, the way this thing has dragged on, we’re all realizing we have to do something.  Nelson Dollar is sitting over in the corner, all by himself, babbling about how he’s ready to sit here and 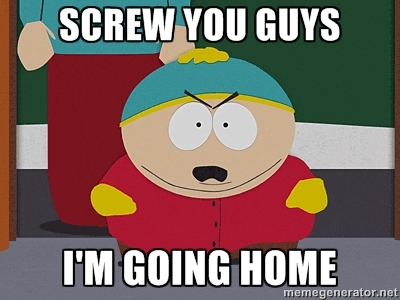 wait it out until Valentine’s Day if he has to.  The Senate is getting fed up with how things are going over here.  They’re ready to just say ‘Screw You Guys’ and go home.”

From the conservative POV, the best case scenario is that everybody does throw up their hands and go home.  That would mean the state would keep operating on last year’s numbers.  That budget was a lot more conservative and responsible.  If that happens, the sky will not fall.  Your children will not lose their teacher assistants and thereby dramatically lose IQ points. (If anyone does fire TAs, it will be the educrats at the central offices around the state who have overspent in anticipation of a funding hike for the new fiscal year.)

One thought on “#ncga: Fear and loathing in the caucus meeting”