[…] “There are forces at work following this election that I do not understand – forces of hate and intolerance. I condemn those forces. I condemn the KKK and Black Panthers and any other group hell bent on dividing us. We must be smart enough to know our words and actions matter.”[…]

Holy cow.  Is this a Republican leader, or the dean of the women’s studies department in Chapel Hill?  What’s Dollar Bill Dave all butt-hurt about?  Here’s more from the N&O’s Colon Campbell, taking a break from trolling among the urinals in your local public restroom:

N.C. Rep. George Cleveland of Jacksonville faced criticism from his Republican colleagues for emailing them a fake newspaper headline that said “Trump forces black family from home” and showed a p

icture of the White House.

Cleveland’s email didn’t include any comments about the image, which he sent to members of the House Republican caucus. […]
Two other legislators rebuked Cleveland for sending the image, The string of emails was obtained by The News & Observer.

“I am not sure what point George is trying to make with the email below but it is certainly in poor taste,” House Rules Chairman David Lewis of Dunn wrote. “There are forces at work following this election that I do not understand – forces of hate and intolerance. I condemn those forces. I condemn the KKK and Black Panthers and any other group hell bent on dividing us. We must be smart enough to know our words and actions matter.”

Rep. Bob Steinburg of Edenton responded to Lewis: “Amen David, Amen!! We need NONE of this even in a poor and in my view tasteless attempt at humor. We are better than that.” 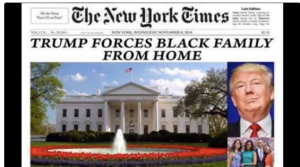 Reached by phone Friday evening, Cleveland defended the email and said he did not create the image or headline. “It was a bit of humor that I thought was a good jab at the media, and that was it,” he said. “The media has been very biased in the campaign.”

I saw the cartoon.  I shared it on the Haymaker’s Facebook page. (It’s posted here, too.)  It’s a mock-up of the NY Times front page, joking about how that paper covered the Trump victory.  MORE:

[…] He said Lewis’ reaction waslikely because the legislative leader is “extremely sensitive to what’s going on in the courts.”

Cleveland wanted to know how a reporter had obtained the email. “If you’re going to get involved, it’s going to be definitely blown out of proportion,” he said.

One legislator who received the email replied with his own attempt at humor aimed at the left.

“We need to set up a ‘safe space’ for our people to go to after ‘micro-aggressions,’” Rep. John Blust of Greensboro wrote. “I see where N.C. State has done this in wake of the election for its students. They are even having grief councilors and granola bars. One can’t help but wonder if such students should be home with their parents.

“We are going to be hit and hit hard in the coming session over many things. Let us strive to develop some thick skin.”[…]

Colon neglected to mention that Cleveland filed an ethics complaint against Lewis in December 2015 that seems to have disappeared into the ether.  And here Colon “magically” receives an email featuring Lewis trying to make Cleveland look bad. (Is that PAYBACK I smell?)

The GOP legislators network off-duty like this all the time.  If you ask me, participating in it all is just asking to get yourself called out and embarrased publicly (by people like me).

Instead of being a useful tool for Lewis, why isn’t Campbell trying to find out the current state of the ethics complaint Cleveland filed against Lewis?  (Likely because stuff like that requires work and common sense and thinking and stuff.)

6 thoughts on “#ncga: Colon Campbell does the Rules Chairman a solid”