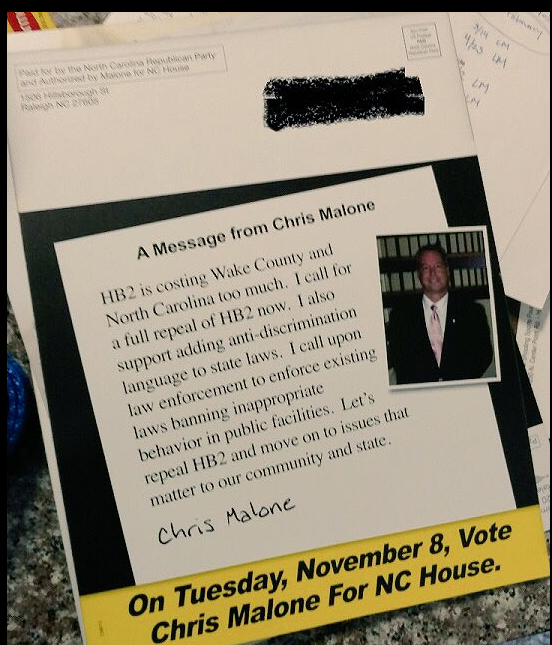 If you look at the top left corner of the above image, you will see “Paid for by the North Carolina Republican Party.”  (Click on the image above to enlarge it.)  *Isn’t that special?*

Well, the Democrats are carpet-bombing his county with negative ads. The NCGOP has done a lousy job defending themselves.  Self-preservation is subordinating principle and duty to constituents.   So, Malone — seeing his political career getting wobbly — decid

ed to go full-wobbly himself.

HB2 is about the only thing keeping a lot of conservatives in Gov. McCrory’s corner.  Malone is perfectly OK to take this position.  His constituents will have to decide on how to deal with his flip-flop.

But the state party paying for a flier calling for the repeal of an issue that has been a linchpin in its get out the vote efforts is appalling.  It certainly creates the impression state GOP leaders are telling the church people ONE THING and everyone else SOMETHING ALTOGETHER DIFFERENT.

Blinkin’ Chris is sure having some fun with this:

*Nice.*  Anyone else starting to feel like Charlie Brown playing football with Lucy?

11 thoughts on “#ncga: Chris Malone FOR HB2 before he was AGAINST it (And NCGOP picks up the bill to market his flip-flop)”