Legislation seeking to limit the powers of local elected officials in Duplin and Harnett counties has the Harnett County board of commissioners and board of education hopping mad and facing off against the bill’s sponsor, NC Rep. David Lewis (R). Lewis’ bill, HB 1108, would keep county commissioners and school board officials in each county from voting on contracts and other fiscal matters within seven months of the expiration of their terms.  Reportedly,  neither the Harnett board of commissioners nor the Harnett board of education were consulted prior to the introduction of the bill, which was referred to committee on May 30:

The bill was created to place a stop on the voting power of Commissioners and school board members leaving their term within 7 months. Meaning that, our elected officials would not have the power to offer contracts to the County Manager and School Superintendent.  The Bill was introduced to the North Carolina house without the prior knowledge of either the county board nor the board of education.

The crowd filled the chairs of this early morning meeting with the tensions high the public comment period was open for a period of 30 mins. The first speaker was Lillington resident Paul Long; Mr. Long said that this was a bill created to give full control over to a select few. The next Speaker was Harnett NAACP President of Harnett County Carolyn McDougal, MS. McDougal said that she was there on behalf of the county and state NAACP and that she found the bill to be disgusting and that the NAACP would fight this injustice against the voters here in the county and at the state level.

NC State Senate candidate Joe Langley took the podium and said that he found it puzzling that with all of the stuff going on in the Legislative session that Mr. Lewis would have found the time to come up with this bill on his own without the coaching of a county commissioner. Mr. Langley challenged the commissioners who knew about the bill to raise their hands, none of the commissioners raised their hands and Mr. Langley continued to show his opposition to the proposed bill. 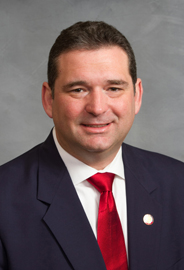 Susan Byerly, said that she is upset by the actions of Mr. David Lewis and if he wanted to run the County Commissioners or school board he should have ran for one of those offices, but we will not allow that state to legislate the county government.

County Manager Tommy Burns took the opportunity to speak out against the proposed bill and said that it was just wrong, “sure I have heard rumors that my job maybe in jeopardy but I dismissed them to rumors. Mr. Burns looked at Commissioner Jim Burgin and said “Jim how would it make you feel for you to be at baseball game with your son and someone come up to you and tell you that you are going to lose your job and you then have to explain that to you son” I have always try to work with everyone and never felt that I was in risk of losing my job until this bill was passed in the house. I saw Mr. Lewis that same day that this bill was attached and he never not once said anything about this bill and that’s just wrong and Mr. Lewis is a coward for doing that, let me spell that out for Mr. Lewis C.O.W.A.R.D… After Mr. Burns finished his speech the crowd broke out into a standing applause and County Commissioner candidate Steve Blackburn yelled out that we have your back Tommy.

Chairman Miller took the floor and handed out a resolution that requested that Harnett County be removed from HB1108 and that Rep. David Lewis take action now, Mr. Burgin made an argument that the resolution was not done properly and made a motion that it be tabled until a later time the motion failed and the resolution was passed 3-2 with Gordon Springle and Jim Burgin voting against the resolution.

The School Board adopted the same type of resolution tonight with a 4-1 vote with school board member Bill Morris voting against it.