Even Hurricane Matthew can get worked into the political jockeying for November.  Here’s Cumberland County state Rep. Billy Richardson (D):

Popeye said it best “I stands all I can stands, I can’t stands no more.” In Sunday’s Fayetteville Observer, Editor Tim White commented on Hurricane Matthew and its devastation saying, “a storm of epic proportions demands epic responses”.

His words require our honest response – and begs an answer to the question which I have heard over and over as I have toured, prayed and grieved with my fellow citizens of this great region. Since we have sacrificed to have a rainy day fund of $1.6 billion, “why are we not in session setting up a mechanism to help our citizens back on their feet?”

Of course, he had to sneak teacher pay into a monologue on the hurricane:

Our State sacrificed for such funding. Our rankings in our higher education have slipped to 39th in the country. Our teachers and state employees did not get raises they deserve and our infrastructure needs remain unmet as our bridges, buildings and roads continue to deteriorate. 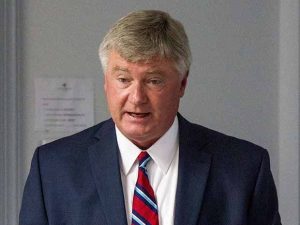 I voted for the Governor’s budget despite  wanting  more  for our teachers and state employees.  But in the end, I remembered Floyd, Fran, and Andrew.

Fortunately, we started a rainy day fund as far back as 1992 which prepared us for these monsters . Unlike now, when Floyd hit, then-Governor Hunt  called  the Legislators back into special session and passed legislation entitled HB2 1999 (Hurricane Floyd Recovery Act) and was signed it into law on the same day.

In doing so, the State created model legislation which answered the needs left unmet  by  FEMA.  It  also  provided  rapid  response  to those needs.  The result: small businesses received zero interest loans and grants which allowed them to quickly return to business , stay in business and keep workers employed.

Environmental sites (floating coffins, gas tanks, and dead livestock) were quickly cleared. Citizens – whose insurance agents were quick to sell policies and even quicker to say no on coverage when homes were destroyed  –  received  loans,  and  mortgage  deferment which allowed them to  affordably  rebuild  their  homes  and remain  in them.

Our farmers,  whose crops were devastated, were given subsidies and loans which allowed them to stay in farming. Eastern North Carolina  was able to rebuild  and  rebuild  quickly.   The Legislature  and then Governor  did their job.

We have a model which works and to move forward with. Again this begs the question of why our current Governor is not calling us back into special session to enact proven legislation which quickly rebuilds the devastated part of our State.

Also, for FEMA to fulfill its full obligation, we must as a State come through with our proportional share which will far exceed amounts currently budgeted to the Governor.[…]

(Here’s the 1999 law that was passed.  Here is the state auditor’s performance review on the Hurricane Floyd funds.)

Ah, so BarryO and his crew are trying to pressure Gov. Pat & The Gang to bust the budget to get help with hurricane cleanup.  *Nice.*    MORE:

[…] Those who would say that we need to wait to determine the exact costs, we now have stronger agencies with better communications in place and are able to move faster.

*Wait to see how much stuff costs before opening the wallet?  Jeez.  What kind of nonsense is that?*  MORE:

All they need is the resources to do so. We as a legislative body have asked our schools, employees, and the citizens of this State to be patient with salary increases and infrastructure  needs .

It  would not only  be an insult to our citizens who are suffering now not to help and to help in significant way, it would also be slap in the face to our State employees, teachers and those we have already deferred salary increases so that a rainy day fund could exist. It is an insult to our citizens who with their taxes and vote have said clearly, “we believe in saving for a rainy day.”

As a State, we have endured two weeks of rainy days of epic propmtions. – our people are hurting. Touring sites is nice – actually helping our citizens through an epic disaster is what our oath demands . Those of us who supported this Governor’s budget are ready to be called to work.