Being seen talking to — or even looking at — Mark Villee can get you screamed at or threatened these days.  It can be hazardous to your professional / political (and, maybe, PERSONAL) health.

Reports are coming over the transom left and right from people who are being harangued and harassed by state Rep. Nelson Dollar or thugs affiliated with him for the, um, unpardonable sins of standing near, smiling at, or speaking to Villee — Dollar’s primary opponent this year.

The problem with that?  In 2004, Dollar was recruited by a filthy rich guy named Art Pope to primary incumbent Republican state Rep. David Miner.  (Apparently, Mr. Miner was not behaving in a sufficiently conservative manner for the deep-pocketed Mr. Pope. Sound familiar?)  Aaah, what goes around comes around.  What was OK 12 years ago is apparently NOT OK now.

Staying with that theme of being a puppet for a filthy rich guy, check THIS OUT: 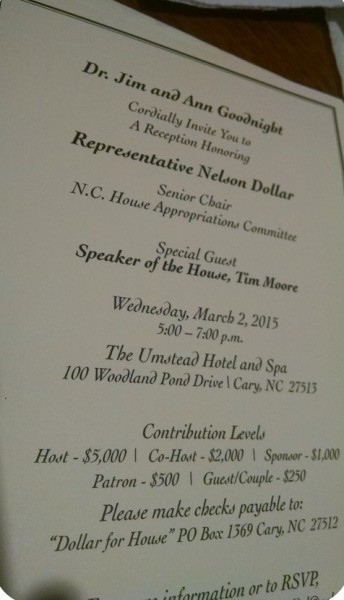 Yes, my friends.  While Mr. Dollar is bashing his opponent for accepting funding from the wealthy Mr. Luddy, he will be showing up hat-in-hand at this function on March 2

hosted by Jim Goodnight, THE RICHEST MAN IN NORTH CAROLINA.

And, you may notice, the Duke of Cleveland himself is the special guest of honor.

4 thoughts on “#ncga: A GOODNIGHT for a DOLLAR”