His voting record has been a substantial improvement over that of his predecessor Howard Coble. But Mark Walker has picked up some during his first term for, among other things, flip-flopping on amnesty for illegal aliens AND supporting John Boehner for speaker.  Conservative Review has given Walker a conservative grade of C (77 percent).  Walker has a primary opponent, Chris Hardin, in the June 7 vote who is challenging him from the right and asking some tough questions about his conservatism.  Let’s drill down a little deeper into that C-grade and see what we find:

REMOVE JOHN BOEHNER FROM SPEAKER OF THE HOUSE

This vote was to determine who serves as the Speaker of the House for the 114th Congress. The Speaker has dominant influence and sets the agenda for what bills and votes are allowed on the floor. After Speaker Boehner partnered with President Obama to whip votes for the $1.1 trillion Cromnibus bill funding Obama’s illegal executive amnesty, conservatives saw that act as the last straw. Because the Speaker is determined by absolute majority of the potential 435 voting representatives, only 29 Republican votes for a candidate other than Boehner were needed to force a second ballot. Forcing a second ballot would have effectively removed John Boehner from Speaker. The conservative position was to vote for anyone besides Boehner or a Democrat. Those listed as YES attempted to remove Speaker Boehner and replace him with another Republican. Those listed as NO voted for Speaker Boehner, a Democrat, or present. Boehner received enough votes to be re-elected Speaker of the House.

This vote was on H.R. 2, the Medicare Access and Chip Reauthorization Act which is expected to increase the nation’s debt by $500 billion over the next 20 years. This bill was cobbled together in a backroom deal by Speaker Boehner and Minority Leader Pelosi. Overall H.R. 2 is a massive health care spending bill that replaces the existing Medicare payment system for health care providers, known as the Sustainable Growth Rate (SGR), with a new bureaucratic pay scheme that would automatically increase reimbursements every year. Although everyone agrees that the SGR was a flawed system, this bill merely replaced one top-down bureaucratic price-control system with a new one, albeit with a more generous reimbursement rate. With this bill Congress failed to address the underlying problems in healthcare entitlements and in true back room deal fashion, included several extraneous provisions designed to buy votes.

This vote was on the key procedural provision known as Trade Promotion Authority (TPA). TPA grants a special fast-track status to trade 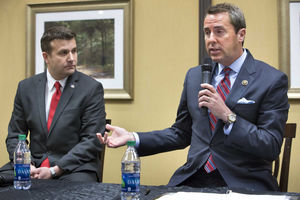 deals negotiated by the president and as such has been dubbed Obamatrade. While conservatives generally support trade agreements as important tools for lowering tariffs and trade barriers, and TPA is often needed in order to effectively negotiate with other countries, this particular TPA was problematic for a number of reasons. Typically, a TPA is passed at the beginning of negotiation cycles so that Congress directs the president to negotiate along specific parameters. In this case, the three primary treaties that would receive fast-track status under this TPA have already been negotiated in secret for years. There is no reason to pass fast track authority without releasing more details about these trade agreements to the public. Moreover, given this president’s penchant for implementing major policies without Congress, there was a widespread fear that Obama would use these trade agreements to pursue liberal policies, such as changes to our immigration system, labor laws, and global warming regulations. For example, according to WikiLeaks, one of the impending trade deals – the Trade in Service Agreement (TISA) – contains an entire immigration section, including a provision prohibiting US authorities from conducting in-person interviews for certain visa categories. Additionally, the main trade deal – the Trans Pacific Partnership – contains a “living agreement” provision, which could enable Obama to expand the scope of the agreement during the final months of his presidency or add countries like China to the agreement. Finally, GOP Leadership negotiated a deal to advance Trade Promotion Authority and in exchange for Democrat votes, promised to renew the crony capitalist Export-Import Bank and a failed government handout program known as Trade Adjustment Assistance, a subsidy bailout for labor unions.