Regardless of whomever wins The White House, Paul Ryan and Mitch McConnell want to assure us that they will protect our interests over the next four to eight years:

Senate Majority Leader Mitch McConnell and House Speaker Paul Ryan appear to be on opposite sides of the Donald Trump question, with the senator backing the party’s presumptive nominee for president and Mr. Ryan still holding out.

But in one aspect they are very much on the same page. When asked about Mr. Trump, his effect on the party, or his prospects this November, each responds by talking about the importance of the legislative branch. Congress, they say, will assert itself again after eight years of an administration they see as having severely skewed the balance of powers.

Implied in their message is the assumption that they will be able to protect the prerogatives of the institution because they’ll still be running it. And that’s part of their underlying point: Keep us in charge, and we’ll keep the president—whomever it is—in check.

(Never mind the GOP majorities on Capitol Hill allowing Barack Hussein Obama to run WILD over the last six years. *Pay no attention to THAT.* 🙂

[…] Mr. McConnell invoked the balance-of-powers argument when asked in a CBS interview Sunday about divisions within the party and Republican voters who might be part of a “never Trump” movement. 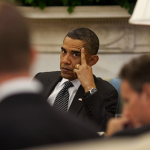 “What protects us in this country against big mistakes being made is the structure, the Constitution, the institutions,” he said. “No matter how unusual a personality may be who gets elected to office, there are constraints in this country. You don’t get to do anything you want to.”

Soooooooo — what have you guys stopped Barry from doing? Anything?

For the record, there has been more GOPe butt-hurt over Trump than with McCain, Romney, Obama AND Clinton combined.  Where was this indignation then — when we needed to see it?