Republicans have had a field day with blasting Kay Hagan about this video — where she kicks someone with a video camera out of a meeting she was leading. Apparently, this tactic has inspired congresswoman Renee Ellmers (who appears to be taking preemptive action): 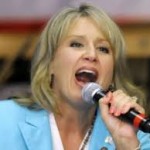 Kay Hagan — a trained attorney — is much better at walking, talking and chewing gum than Miss Harnett County.  Ellmers has had some rather unflattering episodes in recent months when recording devices were in close proximity.  There was THIS meeting with constituents in her Asheboro office. There was THIS radio interview with Laura Ingraham.  And let’s not forget the little speech she gave about the GOP’s need to dumb things down so women can understand them better.  When her comments got reported in The Washington Examiner, Ellmers tried to suggest she was misquoted by the liberal media.  But the reporter had backup — in the form of a recording of Ellmers’s remarks AND a transcript.   After reviewing all that, I can see why she and her campaign team would not want recording devices anywhere around.