The GOPe is at it again.  Just when you thought it was dead, the Export-Import Bank is coming back from the dead with a vengeance like we haven’t seen since Jason Voorhees.   Ex-Im is plain and simple cronyism.  It’s a government giveaway to big corporations whose lobbyists have managed to drop just enough cash in the hands of the right politicians.

Of course, if the GOPe wants it, you’ll find our very own Nee-Nee Ellmers cheerleading enthusiastically FOR it: 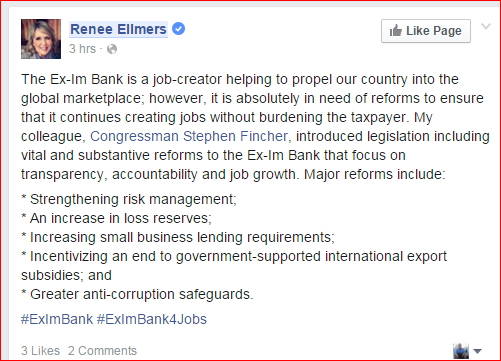 (I DOUBT she even knows what HALF of those words mean.) Nee-nee even goes as far as hauling out the ladies from Miss Jenny’s Pickles — who we last saw in 2014 campaigning for Kay Hagan: 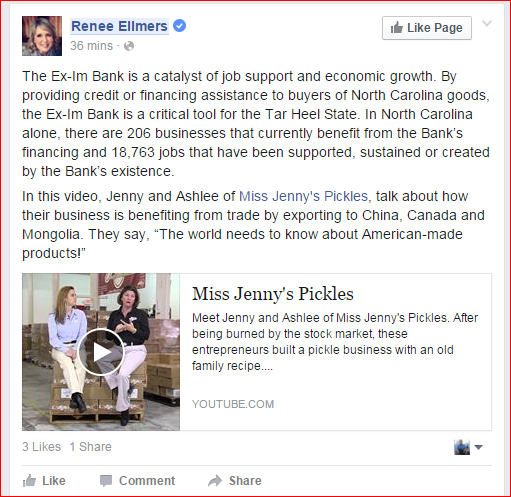 I’m sorry.  In the age of The Internet, is THIS REALLY NECESSARY?  There are all kinds of people running small businesses with national and global clientele VIA E-BAY WITHOUT A BIT OF GOVERNMENT SUBSIDY OR OVERSIGHT.  A good web site does wonders for you these days.

I have a friend who is a grain farmer here in North Carolina.  He has a healthy export deal with South Korea and Japan.  He connected with these folks over The Internet.  Runs the whole thing via The Internet.  NOT ONE BIT OF GOVERNMENT INVOLVED.

If you listen to Nee-Nee, who is likely reading from cheat sheets prepared by lobbyists, you’d think the Ex-Im Bank was a great thing.  Let’s get a different perspective from a really smart lady named Veronique de Rugy:

[… I]t would be a mistake to see this battle against Ex-Im as an end in and of itself. It is not. The battle is better-understood in the context of a broader rejection of government-funded privileges for a handful of connected actors. Indeed, everywhere we look, big business is teaming up with big government, and that’s causing big problems. People know this, and they’re sick of it.

Ex-Im is the epitome of that cronyism and has a charter that is set to expire, which is why it became such a great target. For instance, in recent years, some 60 percent of the bank’s activities have benefited 10 giant U.S. corporations, with 40 percent benefiting one company alone: Boeing. On the foreign side, the cheap loans are extended to giant state-owned companies such as Mexico’s petroleum company, Pemex, and the United Arab Emirates’ airline, Emirates. When the Ex-Im financing isn’t benefiting a state-owned firm, it is often flowing to very successful private firms with plenty of access to capital, such as the loan extended to the richest woman in Australia to finance her iron ore project at the expense of its U.S competitors.

These Ex-Im companies may enjoy the perks of cheap financing and artificially inflated profits, but it’s not fair for the 98 percent of U.S. exports generated without special treatment from the federal government. That’s especially outrageous when the program has taxpayers on the hook for $140 billion.

The Department of Energy’s 1705 loan program falls squarely in that category. A few years ago, it received a lot of media and political attention when one of its recipients, a solar company named Solyndra, defaulted on its $538 million loan guarantee, leaving taxpayers with the tab.

The overlooked scandal of the 1705, however, is that—as with the Ex-Im Bank—most of its beneficiaries are green energy projects backed by gigantic companies with plenty of access to capital, such as Goldman Sachs and NRG Energy.

But cronyism goes beyond loan guarantees. A 2012 paper by budget analyst Tad DeHaven calculated that subsidies to businesses alone cost taxpayers almost $100 billion each year. The subsidies flow to air carriers, community developers, fisheries and wineries. There are also billions in subsidies to rich farmers, on top of such things as the bailout of the automobile industry, which ended up costing $9.26 billion.

Whatever form it takes, this cronyism is harmful. As my colleague Matt Mitchell explains, “whatever its guise, government-granted privilege is an extraordinarily destructive force. It misdirects resources, impedes genuine economic progress, breeds corruption, and undermines the legitimacy of both the government and the private sector.”

The American people are awakening to this reality, and many are demanding change. And they now have champions in Washington to make their voices heard. It’s in that broader context that we should understand the battle against the Export-Import Bank. Indeed, I predict that lawmakers and lobbyists defending the many crony programs that exist today will soon find out that the opposition to the Ex-Im Bank is just the beginning.