SNL’s Tina Fey came out with a movie a few years back that amazingly documented those high school girls we all knew and hated when we were in high school.  I swear — after seeing last night’s coverage of Renee Ellmers’s trip to Fayetteville — the congresswoman’s Mini-Me press spokes-babe could easily have been one of those girls who terrorized Lindsey Lohan’s school in that movie. 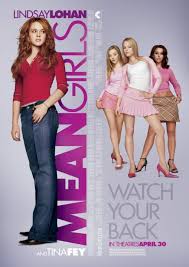 Nee-Nee and her posse showed up in Fayetteville yesterday for a photo op.  Her spokes-babe tried to shake down the local media to only allow access IF they promised to only talk about what Nee-Nee wanted to talk about.  Nicole Carr, from ABC 11, was having NONE of that:

Two media outlets, including ABC 11, were refused interview access to Representative Renee Ellmers on Tuesday. Ellmers and her team set ground rules that would not allow reporters to ask about the alleged affair rumors tied to the House Speaker debacle.

Apparently, the Fayetteville Observer’s Paul Woolverton DID agree.  (For the record, I encountered Paul a lot when I was a drive-by many moons ago.  Then, he was a suck-up to politicians, never daring to write something that might offend the elected class.  Two decades later, it appears nothing has changed.)  It appears WRAL also played by Nee-Nee’s rules.   Who was the other media outlet that got ousted?

I never never never let a politician tell me what I was and was not going to discuss during an interview or a press conference.

Anyway, MAJOR KUDOS go out from us to Ms. Carr.  Purposefully helping politicians sweep stuff under the rug is an abuse of our country’s Freedom of The Press. Want to see what real reporting looks like?  Check out Nicole Carr.

Once again, it’s proven that — if you want to know what’s going on — you HAVE to go online.