The shocking videos of Planned Parenthood officials bartering for baby parts has shocked America.  North Carolinians and folks from across

the country were mortified when Renee Ellmers took the lead to block passage of a late-term abortion ban.

The latest FEC filings indicate that one of the leading advocates for softening the GOP’s pro-life position has given big to congresswoman Renee Ellmers.  Candace Straight is national co-chairman of “Republican Majority for Choice.”  Here’s how she showed up in the latest Ellmers campaign filing:

THAT, in case you are wondering, is the maximum amount one person can give to a candidate in an election cycle.   In January, Straight co-authored a piece in The Huffington Post praising Ellmers for her work to block a late-term abortion ban in the House:

[…] The extreme right has already begun clamoring for primary challenges to these Republicans who simply believed in more examination of the ramifications of H.R. 36; proving again that they will put basic decency aside in their single-minded effort to make all abortions illegal while misleading voters that their objective is to “protect women.” By the same token, the left entirely missed the opportunity for dialogue and condemned Representatives Ellmers and Walorski for having false intentions, claiming they don’t care at all about women, only politics.

[…] With real consideration of the facts, perhaps a common sense policy for increasing access to birth control which thereby reduces teen and unintended pregnancy AND abortions can be achieved. Surely the protections of rape and incest survivors should be a priority, as well as an effort to understand that one-size-fits-all legislation on reproductive choice can leave women and families in dire, life-threatening medical situations. […] 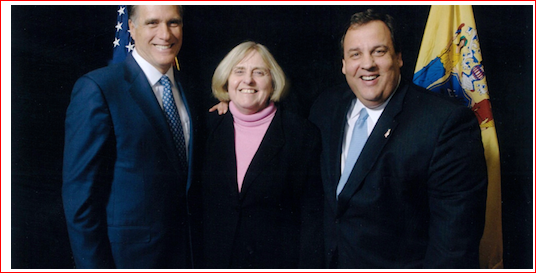 And HERE is Straight – a New Jersey resident and BIG FAN of Chris Christie and Mitt Romney —  pontificating on what she thinks is wrong with the GOP:

[…] The question is, are most people who vote Republican pro-choice, or are the leaders of the small group that controls the primaries pro-choice? And the answer is, most people who vote Republican are pro-choice. They do not want government in their lives. But there is a minority of individuals who have taken over the party apparatus, and they are anti-choice. And so the question becomes, do those people want to have a big tent or not? I think I can speak for everyone in this conversation and say we all want a big-tent party, where people with different views will agree with each other 80 percent of the time but disagree 20 percent of the time, and people of good conscience can work together to solve problems.[…]

Over the last several elections, we’ve seen a gender gap. So you’d have to argue that, yes, the Republican Party has a gender gap, and therefore they have a problem with women. The other side of the story is that the Democratic Party has a male gender gap, but more women vote than men, and therefore it’s important that the Republican Party addresses the gender gap. Individual Republicans are trying to address the gender gap, like Scott Brown in New Hampshire saying he’s pro-choice, and Congressman Gardner running in Colorado who says in his ad that he’s pro-life but he wants to make sure women have access to over-the-counter birth control. That’s a complex issue in itself, given the fact that many of the women who need birth control pills wouldn’t be able to afford them if they were over the counter, but individual candidates are addressing the gender gap issue within their own views.[…]

I ran for office in 2002, and it was to be Essex County Executive — a position that had nothing to do with policy-making around abortion. But it was mind-boggling the number of Republicans who asked if I was pro-choice or pro-life. Most average Americans asked me what I wanted to do with county government. When single-issue voters ask you that question and you say you’re pro-choice, they get angry. And I think it has to do with the fact that some in our party consider this a religious issue. We have separation of state and church, but some people don’t understand that and they want to bring religion into politics. Politics is the worst place for religion, as far as I’m concerned. […]

Again.  This woman is FROM New Jersey.  She can’t vote down here.  Perhaps she has the inside track on some information many  in the Second District don’t?