Well, this ad popped up during the most recent televised GOP presidential debate — making it clear that North Carolina’s Second Congressional District GOP primary will be just as much of a media circus.   The primary is officially a foursome.  In the early stages of this crowded environment, we thought it might be crucial to bring up a few key points:

Kay Daly.  She’s been much more low-profile in-state than her husband Jack. As the GOP nominee for state auditor, he took Democrat incumbent Ralph Campbell down to the wire in 2000.  Kay, herself, spent some time as the official mouthpiece for the NCGOP.

But the couple has spent the great majority of their time in the DC area since then.  I saw the list of endorsees on her site — from bomb-throwers like Eugene Delgaudio to religious right leaders like Gary Bauer and James Dobson – and noted only ONE (George Little) who can even vote in the Second District.

The Dalys ties to the Second District are a bit sketchy.  They just moved to Moore County this year.  This opens them up to carpet-bagging, parachuting-in accusations.  (Though, those didn’t seem to hurt Richard Hudson.)

I don’t know that I could ID Kay Daly if I bumped into her on the street.  (I actually had a tough time finding a picture on Google for an earlier post.)  Most voters in the Se

cond are not going to be familiar with her activities in the conservative activism arena.  This ad is likely the first impression they are going to have of her.  Will an image of her firing a shotgun — with an angry expression on her face — be an introduction that makes local voters comfortable with her?

Team Daly needs to get their girl out and about.  The Second is a small-market district.  Retail politicking in small-town functions is what works.  If she wants to win, she needs to couple her no-holds-barred attack on Ellmers with a sincere effort to convince local voters that she is ”one of us.”

Frank Roche.   Frank is a known quantity.  He was Ellmers’s lone opponent last time around.  (He also ran unsuccessfully for Congress in 2010 and state treasurer in 2012.) 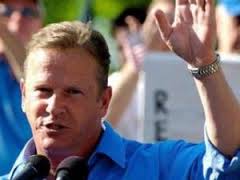 aising numbers.  He was badly outraised by Ellmers in 2014 and is not exactly lighting fires this year.

I have no doubt Roche would rack up a much better voting record in Congress than Ellmers.  But he HAS to GET THERE first.   To do that, you have to woo the people casting votes.  You have to raise your name ID. You have to put a message out there that tells the voters they need you more than the incumbent.

From what I’ve seen — via Youtube — and heard — from all kinds of political operatives and voters — Frank has a hard time getting people to warm up to him.  If you tick off enough people — or spend way too much time telling people how much smarter you are than them —  your ability to raise money to run a competitive race and win enough votes is seriously hampered. If Roche wants a different election day headline — different from those of the last  three cycles — he needs to really bone up on his people skills.

Jim Duncan. Overall, he presents an attractive package.  A successful self-made businessman.  Well-versed on the issues.  A solid conservative.  A leader in his community. NOT a politician.

The problem?  So far, Duncan has spent an inordinate amount of time selling people on how nice of a guy he is.  (That is an easy sell.)  His team needs to devote some more time to selling the idea that Ellmers needs to go (and be replaced by Duncan.)  There is a lot of ammo out there to use.

Ronald Reagan had a lot of success presenting himself as a nice guy, while making the case why Jimmy Carter needed to go and Walter Mondale needed to stay in retirement.

Renee Ellmers. Hoo-boy.  Talk about a target-rich opportunity.  She got into Congress in 2010 thanks to a seething hatred of Bob Etheridge.  Thanks to her prima donna attitude and her deceit on the issues, she is in real danger of meeting Etheridge’s fate.  She got lucky

with some generous redistricting and two cycles with under-funded, lesser-known primary opponents.

The Tea Party clearly put her over the top in 2010.  Since then, she’s thumbed her nose at these grassroots warriors.  Ellmers has embraced the DC establishment — voting to raise the debt ceiling, voting for amnesty, poo-pooing efforts to kill ObamaCare, blocking a late-term abortion ban, voting for tax increases, and growing government.

Yet, she’s survived her under-funded primary challenges by lying through her teeth via paid media.  Once again, she’s sending out campaign mailers at taxpayer expense.  (Anytime you see a signature where a stamp should be, that means YOU and I are paying for it.)  The

latest mailer includes the laugher that she voted FOR the late-term abortion ban.  (Yeah, she did the previous two years.  But this year, she led the effort to kill it.)

That ranks right up there on the dishonesty scale with her 2012 televised claim that she was ”a fighter for traditional marriage.”  While that ad was running, she was publicly bad-mouthing the marriage amendment to the state constitution.

Ellmers tries to call herself a conservative.  But all kinds of vote rankings indicate she is clearly the most liberal Republican member of North Carolina’s congressional delegation.

Renee Ellmers needs to have been gone yesterday.  She is a disgrace.  She is emblematic of what’s wrong with Washington.  We’ve got a great choice of candidates here to choose from as her replacement.  Let’s hope the challengers spend more time selling the voters on the need to retire Ellmers than they do trashing each other.

That would be a great way to allow Big Government Barbie™ to sneak back in for two more destructive years.