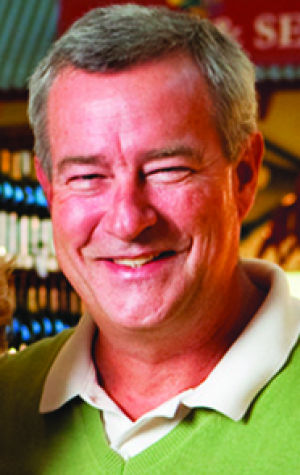 Gov. Pat got a lot of mileage out of The Who’s classic “Won’t Get Fooled Again” during his successful 2012 campaign against Walter Dalton.  The actions of the NCGOP establishment at the recently completed state convention has me thinking of that song, as well — more specifically of the lyrics cited in the title of this post.

A LOT of folks tried to tell me how Claude Pope would be a great friend of Tea Party and other grassroots activists.  Two things had me wary of that spin:  (1) the fact that he’s first cousins with state budget director and BIG Gov. Pat fan Art Pope, and (2) his admission to me that he was Gov. Pat’s hand-picked choice for NCGOP chairman.

Well, this past weekend, Pope overwhelmed Tea Party activist Jack Brosch to win the state party chairmanship.  So, we’ve got him for at least two years.

Our friends over at Publius2013  tell us that Pope appears to be foresaking the anti-establishment route and aligned himself with the crowd at NCGOP that has stomped on and primaried Tea Partiers over the last few years:

Claude Pope was elected (as expected) at the NC GOP Convention over the weekend in Charlotte.  Though the Vice-Chair race was expected to be more competitive, Joyce Krawiec won in the first round of voting with over 50%.  While Pope is more of an establishment-type, his leadership style has held hope for many that we’ll still have a net positive change from the spoiled antics of “always support your leadership” Robin Hayes.

That hope lasted about 15 hours.  At the Executive Committee meeting on Sunday, Claude Pope introduced his “slate” of officers for the NC GOP.  Phil Strach, who chaired the meeting, ended nominations so no others could be offered from the floor.  Ultimately, Pope’s slate was “elected” – if that’s an appropriate term. They included Michael McKnight as Legal Counsel, who works in the same law firm as  Strach.  At one point in a discussion with another member, McKnight haughtily ended their debate with the third-grade tactic of “have you gone to law school?” and strode away from the microphone.  Later another member used a point of information to ask the chair (tongue-in-cheek) if any of the members present were eligible to be there if they did not also attend law school.

Pope’s worst picks of the day, however, were Jeff Morse, and Steve Swanson as Treasurer and Assistant Treasurer (respectively).  Readers of this blog will recall Morse as a “power behind the throne” type who quietly controlled much of what happened in Wake County from behind the scenes in both Claude Pope’s term as Wake County Chair and in Susan Bryant’s regime.  It has been suspected that Morse is the source of much of the contention in Wake County having notorious feuds with then School Board member Ron Margiotta and others and allegedly fomenting the culture of cutting people out of the process or conversation if he thought they disagreed with him.  He and Swanson are rarely seen apart at any of the major GOP functions and if you discreetly listen, you can almost always hear them criticizing others on a regular basis – particularly those who don’t buy into their neo-con/status quo/establishment plan of action.  Morse particularly is a self-important narcissist and a danger to the success of our party.  Mark my words, this will be borne out in time.

The Executive Committee meeting itself was no shining testament of Pope’s ability to bring people together.  Absent for much of the meeting, Pope let Robin Hayes continue to interject himself through much of it.  Between Hayes and Strach, honest debate was not only stifled, but completely shut out.  Hayes repeatedly rose to speak anytime someone said something he didn’t like and rehashed his Tampa Tantrums telling members to abdicate their responsibility as an oversight committee and just rubber stamp anything leadership proposed.  Strach repeatedly abused his possession of the gavel to shut off debate and at times deny members the right to be heard completely.

Several folks who attended the convention told me they thought it was strange that Hayes basically ran the executive committee meeting — since party rules state that a chairman’s term begins immediately upon his / her election.  (The ExComm meeting occurred AFTER Pope was elected.)

As an added bonus, HERE is some audio of one of the more contentious segments of the NCGOP executive committee meeting this past weekend in Charlotte.  (Thom Tillis and Robin Hayes can be heard frequently throughout this recording.)

I talked with a member of the Executive Committee who is really bothered by what he witnessed this weekend at the dawn of The Pope era:

“These guys at state party headquarters don’t get it.  I have a lot of Tea Party friends who are fed up and ready to go the third party route.  They are tired of getting run over, lied to and abused by these guys in Raleigh.  I thought Claude’s election could help calm things down.  If state party leadership doesn’t reconsider, and abandon, some of their tactics, they are going to push a lot of people, who have worked really hard for Republican successes in this state, right out the door and into a third party.  I’m not talking about a handful of folks.  I am talking about an exodus of enough people to do some serious damage to the North Carolina Republican Party’s electoral fortunes.”