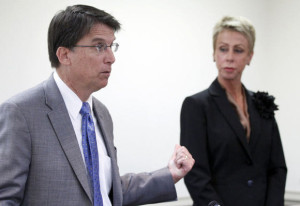 Gov. Pat McCrory is getting kudos among the general populace for his tough comments on the state Medicare program at a Thursday press conference.  Auditor Beth Wood is also getting a tip of the hat for a tough audit that found tons and tons of waste fraud and abuse.  But there were a few things that came up during their joint presser on Thursday that got my spidey-sense tingling. First:

SCREEEEEEEEECCCCCCHHHH !!!!   So, we have an insinuation in the audit that “legislative leadership” may have violated the law.  Names?  If we’re going through with this transparent, good government thing, we need to lay all of the cards on the table.  Surely, it couldn’t have been US Senator-in-waiting Thom Tillis.   Somebody in authority needs to get to the bottom of THIS.
And, the second item:

[…]“This audit should be a concern for every North Carolinian,” said Governor McCrory. “Every dollar that is mismanaged at the Department of Health and Human Services for Medicaid is one dollar less that is available for medical services, education or road and bridge repair.”  […]

Um, let’s not forget family savings accounts, retirement plans, kids’ college funds, grocery bills, car payments, house payments.  Recovered wasted money doesn’t have to go back into the bureaucracy.  It could go back to the people who worked hard to actually make that money.
And don’t forget THIS GEM from the AP:

Gov. Pat McCrory said Thursday he is withholding judgment on whether North Carolina should expand Medicaid coverage under the federal Affordable Care Act, even as fellow Republicans in the state legislature move to block the expansion.

McCrory spoke Thursday as State Auditor Beth Wood, a Democrat, released a 70-page critique of the Division of Medical Assistance, which oversees state spending on the health insurance program for low income families that’s jointly funded by the state and federal government.

The Republican who took office Jan. 5 said he doesn’t intend to make a decision on Medicaid expansion until his administration has an opportunity to fix management issues discussed in the audit.

And the coup de grace from WRAL:

“This audit reinforces the fact that we cannot expand Medicaid and put more North Carolinians into this system without first addressing many of the underlying issues costing the taxpayers millions of dollars every day,” McCrory said. “My total focus is going to be on reforming Medicaid. After we fix the system that we have we will go through a thorough review of other options that are available for us.”

Our governor appears to be reinforcing the belief that he is guided more by the principle of  “bureaucratic efficiency”  — I know, an oxymoron —  than limited government.    It also appears that many Republicans in the NCGA are working off of a different game plan than the Republican governor.