Governor Pat McCrory unveiled his education agenda yesterday, and opponents of the common core curriculum can’t be happy with what they heard: 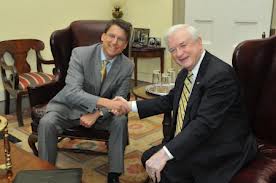 Legislators Retreat on Monday night, though he did not provide specific policy plans.

McCrory repeatedly emphasized the importance of bipartisanship in approaching the issue of education, saying “this is not a Republican issue or a Democratic issue,” and praised former Democratic Gov. Jim Hunt as a valued adviser.

“Jim Hunt is a hero of mine, he’s a mentor of mine, and the state has been so fortunate to have him in leadership in so many different ways,” he said. “From the day I came in office and was sworn in and then sworn at at times, he’s been a great adviser to me.”

Let’s see.  In 2012, conservatives were told to hold their nose over policy differences and march under the banner of “party loyalty.” And we got a Republican governor — who views Jim Hunt, the capo di tutti of the state’s Democrat Party machine, as a hero and allows him to influence at least one of the most important pieces of state government policy.

Former Governor Hunt spent 16 years in the executive mansion in Raleigh.  He is widely hailed as “The Education Governor” — despite the fact we are STILL trying to “fix” public education 14 years after the end of his last term in office.  Hunt is one of the state’s — and the nation’s — biggest cheerleaders for common core.

McCrory’s fellow Republican, Lt. Governor Dan Forest has come out strong against the common core curriculum.  But a recent interview he gave The N&O indicated a possible softening of that opposition.

In 2014, conservatives are getting the same spiel from the GOP establishment:  Put aside policy differences, and focus on getting someone with an R next to their name elected.

What good is it to elect an R who is going to push for — and vote for — things that a D in that same position would have?