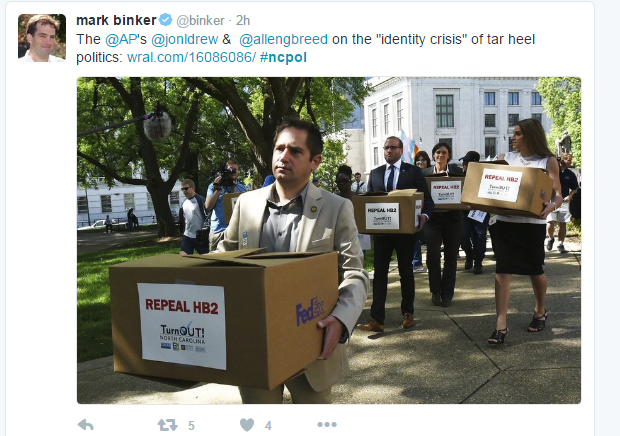 Yep.  Promoting MORE leftist propaganda with a photo of an event proven absolutely to be a fraud.  The Round Rev and his posse held a rally in front of a

bunch of these boxes allegedly full of petitions calling for the repeal of HB2.  On TV, it looked like a mountain.  In reality, the governor’s office received maybe two boxes not completely full.  Most of the petitions inside were from out of state.  The blogosphere had to reveal the scam.  Binky and his pals simply transmitted the lies for Barber and his bunch.

So, what was so great about this AP story Binky so proudly promotes on Twitter?  Here you go:

Democrats outnumber registered Republicans by more than a half-million voters. Yet the GOP has controlled the General Assembly for six years — with supermajorities in both chambers most of that time — and has pushed through a conservative agenda that has slashed taxes, redrawn voting districts and even banned the removal of Confederate monuments without legislative approval.

North Carolina is also dealing with an image problem. Once hailed as a beacon of the New South, it has become something of a pariah state for many, thanks largely to a new law dictating which bathrooms transgender people can use.[…]

Really? All these Yankees playing golf here in Moore County, and hanging out on our beaches must not have heard about that whole pariah thing.  And these AP boys and Binky are still ignoring Miz Leslie’s confession that HB2 has made barely a dent in the state economy.  Wait, there’s MORE:

In a widening protest, the state has been put on a no-fly-to list by several city and state governments, and it has lost business prospects and rock concerts. Perhaps worst of all in this basketball-obsessed place, it has lost NCAA tournament games — all over House Bill 2, dubbed by opponents as “Hate Bill 2” or simply “the bathroom bill.”

“We are no longer viewed as a progressive state but a backwards one,” Mayor Harold Weinbrecht of Cary said in early September after the collegiate sports organization announced that it was pulling four events from the liberal town — whose name, the joke goes, is an acronym for “Containment Area for Relocated Yankees.” […]

Keeping men out of the ladies restroom is backwards ????  The last time I checked, there is no wall around the state’s perimeter.  Weinbrecht and all his Yankee comrades are welcome to move somwhere more “progressive.”   MORE:

But the state is a mix of Nasdaq and NASCAR. It has an agrarian heart; only Texas has more rural residents. And it is still coming to terms with a past that allowed a state-funded eugenics program to flourish well into the 1970s and has provided fertile ground for the Ku Klux Klan.[…]

Fertile ground for the Klan, eh?  I do recall from my North Carolina history classes that the Klan took over the Democrat Party during Reconstruction and staged a coup to overthrow the Republican state government that had been so busy helping displaced blacks.  I also remember from reading Rob Christensen’s book on North Carolina politics 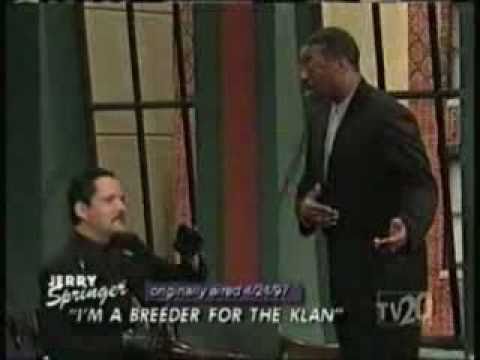 that The N&O was founded as the chief propaganda organ of the Klan rebellion.

Granted, we’re talking the 19th century.  I don’t believe I’ve ever actually seen a Klansman in person.  I’ve seen them on Jerry Springer.

These people don’t stop.  It’s bad enough to see and hear the Soros crowd carpet-bombing us for leaving the Obama plantation in 2012.  They want us back. Though, I don’t see a vicious slander campaign charming the state’s voters back into their, um. loving arms.

It’s doubly sickening to see our very own drivebys — who ought to know better — aiding and abetting this crap.

2 thoughts on “Lyin’ Binky, The Crooked AP, and FERTILE GROUND FOR THE KKK?”