The same crowd that gets threatened by statues and thinks the US DOJ is interested in how many of your family members voted for The Evil Pant-Suited One™ in 2016 has got a new one they’re trying out — this time in North Carolina’s Second Congressional District race:

First of all, there is no evidence that George Holding has ANY involvement in the day-to-day operations of First Citizens Bank.  Let’s get that out of the way.   Second, town halls are basically a chance for hardcore kooks to beat on you like a piñata in Tijuana.  Average Joes and Marys typically don’t attend those things. ( I don’t blame George on that one. )

I got a bit of education on the current state of banking just last weekend.  I saw a friend of mine who is a senior exec with a major bank (not First Citizens, FWIW).  I had seen reports that his bank was closing and consolidating several branches and other customer service facilities in the region.  I asked what was up with that.

He explained to me that — like with record stores and book stores — the Internet is forcing major changes in the way banks do business.  Fewer people than ever, he told me, are actually coming in to bank facilities to talk face-to-face with bank employees.  Online banking has really caught on. Even with the senior citizen- Medicare — social security crowd.   From a business standpoint, it doesn’t make sense to keep so many branches and other customer service facilities open when foot traffic at those locations has declined so dramatically.  Business, he tells me, is great in spite of the drop in foot traffic.

It got me thinking.  I rarely venture to a branch.  Maybe on the rare occasion I need some cash from the ATM.

Occasions like this are great for educating lefties that businesses are not charities, but have making money as their purpose.  If you’re spending more money than you’re taking in, you’re not making money. 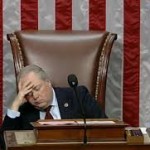 I’ve seen polling showing Holding down in the polls.  His main problem is his image as a seat-warmer.  He is so quiet and low-key.  His foes have done a great job of defining him by the notorious sleeping-in the-speaker’s-chair photo. (And ol’ George hasn’t done much to dispel any of that.)

Holding did a significant tour on Jesse Helms’s DC staff. Some of that Helms magic HAD to have rubbed off on him. Like Trump (and Helms), he doesn’t NEED the lobbyist money.  It would be nice to see him taking some of what he picked up as a Helms staffer and using it to educate the voters  that (1) conservatism is good for you, and (2) there is something else out there besides DC business-as-usual.  (Conservative Review currently has Holding rocking a gentlemanly, respectable 80%-B conservative rating.)

And make a little more noise while he’s at it. (Even outside of campaign time.)

6 thoughts on “Low-info Left not Holding back on George.”