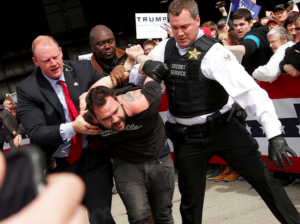 If we’re going to hold every performer / politician / public figure / writer / speaker / etc. responsible for the actions of their supporters, let’s at least be evenhanded and fair about it. (For the record, I take no responsibility for the actions of ANY Haymaker fans.  You folks are all grownups.)

The drivebys hectored David Duke into saying he thought Donald Trump was “the best of what’s out there.”  THAT got transformed into an “endorsement” that Trump can’t possibly disavow enough.

Now, The Fayetteville Observer — whose owners contribute to Democrats their paper covers — is taking a swing at this whole racism thing:

[…] A Fayetteville woman who volunteers at the downtown Trump campaign headquarters is not a white supremacist, her father-in-law says, even though she has what may be white power tattoos. […]

(*I like how they stick the MAY in there.*  Libel insurance.)

Really?  We’re checking the tattoos of campaign volunteers?  (I bet there have been some interesting ones at Obama and Sanders and Clinton campaign offices.)

John Hinckley was a fan of Jodi Foster.  Should she be blamed for the attempted assassination of Ronald Reagan?

Obama pals around with Bill Ayers — an admitted terrorist tied to blowing up stuff and shooting at military folks.  THAT was ho-hum.  Let’s not forget his preacher Jeremiah Wright.  9-11, according to the crazy rev, was all about ”chickens coming home to roost.”  *Nothing to see here.*

Where is the concern and outcry about a candidate who attracts fans like THIS?   (I don’t believe this girl in Fayetteville has tried to assault a presidential candidate or tangle with the Secret Service.)