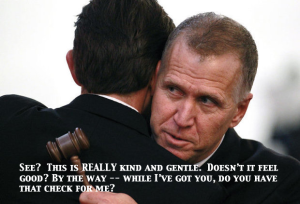 My political life tracks back to the 1988 Bush-Quayle campaign.  That’s where I cut my teeth in this game.  I was attracted to Bush because of his ties to my hero Ronald Reagan.  Though, when GHWB first announced he was going to be ”kindler and gentler,” I took it as a slap at Mr. Reagan — the man who led the turnaround of our country from the Carter disaster and who put Bush in position to be president. In 1992, I was aiding and abetting Pat Buchanan’s primary challenge to Mr. Bush.

Establishment types LOVE to paint us on the right as big meanies and themselves as the most caring, most sensitive bunch.  It’s the kind of logic only an 8 year old could appreciate.  *Mom and dad are really cool if they GIVE me everything I want.  But they are REALLY MEAN if they make me WORK for the money to pay for what I want.*

and Charlotte’s genial geriatric are praising whatever deity they worship that Thom Tillis and his House caucus were there to water-down the Senate’s conservative craziness:

Is this the kinder, gentler Republican legislature?

“I actually believe if the Democrats were in the majority … this would probably look a lot like (their) budget,” Republican House Speaker Thom Tillis said during debate on the House floor.

Oh-Kay. Tell us again what the advantage is to (1) having a GOP majority on Jones Street and/or (2) what we gain by replacing Kay Hagan with THIS GUY.

Oh, and here comes the transcription from the BluePrintNC talking points:

The 2014 term, in both tone and substance, shifted in significant ways from a year ago when Republican leaders took full control of the lawmaking process for the first time in more than a century and advanced a far-reaching conservative agenda that drew national attention and mass protests. […]

A year ago, Republicans rejected the expansion of Medicaid under the federal health care law, a move that blocked hundreds of thousands of lower-income residents from receiving health care. This year, a cost-saving plan to remove thousands North Carolinians who are elderly or have disabilities from the current Medicaid rolls failed.

That characterization is a wee bit dishonest.  Lawmakers were informed that North Carolina has some of the most generous Medicaid benefits in the nation.  North Carolina’s taxpayers have been paying for a whole lot more than what the feds actually require that we pay for.  MORE:

A year ago, lawmakers eliminated career status, or tenure, for public school teachers – an effort later invalidated by a judge. This year, an attempt to link a pay raise to the end of tenure met a roadblock.

A year ago, the state budget cut $120 million earmarked for teacher assistants. This year, Republican lawmakers touted efforts to preserve money for the positions.

Once again, state lawmakers don’t make specific personnel decisions for local school systems.  They appropriate a pot of money that is managed by the local systems.  If the local boards decide to load up on six-figure-salary do-nothings at the central office, at the expense of teacher assistants, parental wrath needs to be directed at their local school boards.

So, lefties are kinder and gentler?  Try espousing and / or practicing your heart-felt religious beliefs against abortion or homosexuality.  See how kind and gentle the lefties treat you in response.  Speaking of kind and gentle, let’s see what Gollum the Blinker thinks about all of this:

too far a year ago.

“It’s a less extreme session, because the folks running the General Assembly realized how unpopular their ideology is, and it’s an election year,” said Chris Fitzsimon, executive director of the progressive N.C. Policy Watch.

In the coming months, we’re going to be peppered with claims that Thom Tillis has led a conservative revolution in Raleigh:

Tillis’ campaign contributed to the acrimony this session between the House and Senate, said John Hood of the conservative John Locke Foundation.

“It has been a very intense session in terms of differences between the House and Senate,” Hood said. “I don’t think anybody is getting everything they want.”

The tension was also a reflection of the House’s less ideological approach.

With support from Gov. Pat McCrory, Tillis rebuffed attempts from the Senate to push a more conservative agenda that included the efforts to curtail Medicaid, trim teaching assistant positions and end teacher tenure.

“When teacher assistants know that the House fought and stood firm and was prepared to walk away without a budget change because we said zero teaching assistants will be cut, they are going to like it,” Tillis said during the budget debate Friday.

Senate leader Phil Berger, an Eden Republican, defended his chamber’s policies, saying it would have helped ease cost overruns in Medicaid and provided bigger teacher raises. He said the chamber’s conservative initiatives “would have moved the state in the right direction further if we had been able to accomplish some of those things.”

Sen. Josh Stein, a Raleigh Democrat, said the House “softened the worst stuff the Senate did.” […]

7 thoughts on “Is moving left politically REALLY “Kinder and Gentler?””