There is a group of ladies here in Moore County who have done yeoman’s work in verifying voter rolls.  They’ve helped catch a non-citizen who voted twice and a number of peo

ple who voted in multiple states.  They’ve sought help in covering the bare minimum expenses for the verification effort — copying, postage, etc.  The local GOP and Republican Men’s Club have been helping out.  But – -thanks to some GOPe boobirds — that help may be drying up. I am told that the party organization has cut off the voter integrity project, and the Men’s Club is heading in the same direction.  That decision is baffling, since the project’s work protects the integrity of elections in the county and, indirectly, helps the GOP.

Also, in other voting news, I’ve received word that Moore County GOP chairman John Rowerdink has communicated in writing to the board of elections that he, and his group, have no qualms with Sunday voting.  On the face of it, Sunday voting doesn’t sound like much of a big deal.  But, here’s how one grassroots activist explains the seriousness of the issue: 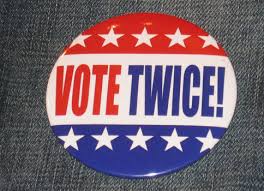 “Every Sunday, you’re going to have the preachers in the AME churches preaching fire and brimstone about the Republicans.  Buses will be waiting in the parking lot, and folks will be encouraged to climb on and ride on over to the polls right after church.  It’s a plan tailor-made for the Democrat ground game.  There is already a ton of time made available for voting.  We really don’t need to go down this road.”

3 thoughts on “In Moore County, the GOPe rolls over and plays DEAD.”