Here’s a great primer on how drive-by “news” coverage in our fair capital city works.  First, you get a press release / tweet from a liberal pol / organization, like — oh — this one:

Stuff like that makes a beeline for our little buddy Binky over at WRAL. He may be a little late jumping on it.  He’s BUSY with something else:

*Yeah.  That’s what I want when I tune into ESPN — Binky bloviating about GAY STUFF!*  (Perhaps they think he’s transgender, and can offer a first-hand account of the impact HB2 has had on “him”?)

Once Binky is done with ESPN, he can get on to taking care of the Cooper for Governor campaign: 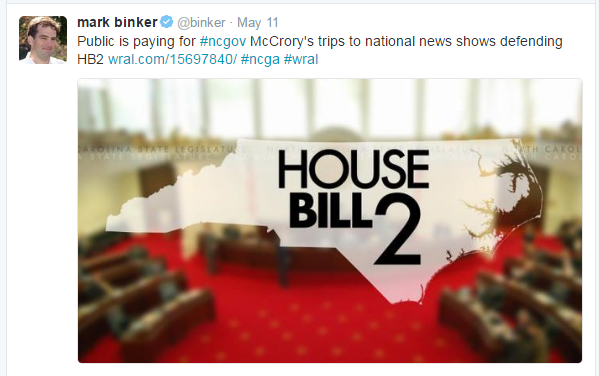 Roy Cooper has DONE NOTHING for four years but campaign on the state’s dime.  NOTHING.  Binky apparently has not noticed.  I am sure he also never noticed all of those rinky-dink ribbon cuttings that Hunt, Easley and Perdue all attended on the state dime which HAPPENED to be within close proximity of a high-dollar fundraiser that same day.

At least this was Meet The Press — and NOT a fundraiser.  And I DO believe it’s a major part of the governor’s job description to be an advocate for the state to external audiences.  This appearance was in defense of a state policy he signed.  SOMEBODY has to defend North Carolina.  Roy Cooper won’t do it — and hasn’t done it — in court for the marriage amendment or THIS. (Even though that is a major part of HIS job description.)

Binky and his driveby colleagues are too busy regurgitating material from the Cooper communications shop.  (When is the last time you saw a driveby actually try to explain to his or her readers or viewers what HB2 ACTUALLY SAYS?)

Want to do some real reporting?  Give us details about what exactly it is that Roy Cooper has been doing for the last four years that is so deserving of a six-figure taxpayer-supplied paycheck.

Going to the Super Bowl is clearly NOT state business.  Going on Meet The Press to defend your state against damnable driveby and Democrat lies IS.