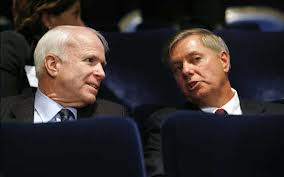 We posted here about an NCGOP establishment vs. grassroots spat in Haywood County. There have been previous issues in Beaufort, Craven, Davidson and Gates counties.

It appears the folks just south of us are having a strikingly similar family feud.  US Senator Lindsey Graham — John McCain and Richard Burr’s BFF — is fighting for his political life.  He has three serious primary challengers in this year’s GOP primary. Like Richard Morgan and Thom Tillis up here, Graham is getting a little  taste of censure and rebuke:

U.S. Sen. Lindsey Graham (RINO-S.C.) has reportedly been censured again by one of the state’s largest, most influential Republican party organizations.

By a vote of 56-24, the Greenville (S.C.) County Republican reportedly voted to censure Graham this week. News of the censure was first reported by Jeff Quinton of The Quinton Report.

Obviously this wouldn’t be the first time the liberal lawmaker has faced a rebuke from his own party. In fact Graham has been censured by county parties in Chesterfield and Fairfield already this year – by overwhelming majorities. In previous years, he’s been censured by Republicans in Charleston, Lexington and Greenville. In fact many more GOP groups would likely be adopting such resolutions were it not for prohibitions imposed by their leaders.

Palmetto State Republicans are apparently issuing a gag order of their own in re:  this whole censure thing.  Methinks some of Claude Pope’s “wisdom” is seeping across our southern border:

The leader of the S.C. Federation of Republican Women (SCFRW) is banning the group’s members from expressing their displeasure with the state’s GOP incumbents. In an email to the group’s members this weekend, president Charm Altman informed them they would not be allowed to introduce resolutions critical of “currently elected Republicans.”

“I do not want any negative resolutions,” Altman wrote. “If there is a candidate your club wishes to pass a resolution concerning negative feelings do so, but until after the primary we support our currently elected Republicans.”

Last time we checked it was the job of party organizations to remain neutral during primary elections – not play favorites.

Altman is no stranger to toeing the line on behalf of establishment Republicans. Less than two weeks ago she made news by banning critics of U.S. Sen. Lindsey Graham (RINO-S.C.) from attending a breakfast event in Mount Pleasant, S.C.

The conduct of the SCFRW is frankly surprising considering Graham’s record is so anti-Republican – and considering one of his primary opponents is a woman.

One thought on “GOP, grassroots unrest bubbling over in SC, too”