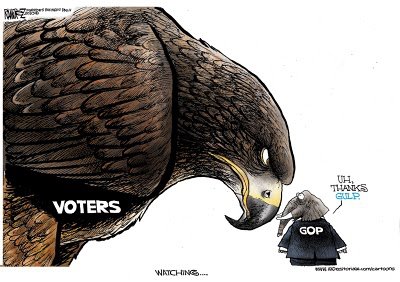 AAAARRRRGH.  (*That’s my frustration noise.*)  We handed these Republicans a gift in 2010, gave them a mandate and specific instructions on how to proceed, and we get THIS:

Freshman Republican Rep. Rick Crawford of Arkansas thinks he’s figured out a way of nabbing that most elusive of Washington beasts, the Grand Compromise (via Politico):

[Crawford] will propose a surtax on millionaires Thursday morning, a crack in the steadfast GOP opposition to extracting more money from the nation’s top earners. The Arkansas Republican will unveil the plan during a local television interview Thursday morning, and plans to introduce legislation when the House returns next week, according to sources familiar with his thinking. Crawford will propose the additional tax— expected to be north of 2.5 percent — on individual income over $1 million as part of a broader fiscal responsibility package. “He’s watched the Gangs of Six and 100 and deficit commissions, as well as leadership’s budget and tax plan, and he feels there will never be a deal that will pass the Senate without a revenue component,” a Crawford aide said, describing the legislation without attribution because it has not yet been officially announced.

1. The best way to raise tax revenue is by boosting economic growth. The second best way is to trim or eliminate tax breaks. The worst way is to raise marginal rates on people with the most ability to avoid them via economically inefficient tax shelters. Also note that this surtax would be in addition to the 3.8% surtax on investment income starting on Jan. 1, 2013.

2. Higher taxes in exchange for what, exactly? Structural entitlement reform or — more likely — cuts in future spending increases according to some fanciful budget baseline.

3. What if we tried  increasing taxes on higher incomers enough to reduce the average federal deficit to 2 percent of GDP over the last five years of the decade? According to a 2010 Tax Policy Center study, if you used the Obama budget as a baseline, you would have to raise the the top two rates to 90.9% and 85.7%. And even that forecast comes with a major caveat: “These static revenue estimates do not account for behavioral change.” Shorter, we assume massive tax increase don’t kill the economy.

4. William Voegeli in City Journal argues against just this sort of political tactic:

Nor does it make sense for the GOP to accede to tax increases in order to win concessions, such as caps on government spending. There is overwhelming historical evidence that the politicians who establish such limits never shrink from using their clout to evade them. In an age when market and voter apprehensions about sovereign debt constrain borrowing, the refusal to raise taxes is a spending limit, one far more effective than any parchment barriers that politicians can devise. Norquist once said that “grand bargains” combining spending cuts and tax increases recalled the deals that “the Soviet Union was offering as it left Eastern Europe. And every time we didn’t give them an answer they kept asking for less.” By restricting the fiscal oxygen supply that sustains a fundamentally flawed system, Republicans are hastening our welfare state’s perestroika.

Unbelievable.  Investors are already scared to lay out any new capital AS IT IS.  These Republicans are starting to make George (“Not a dime’s worth of difference between the two parties”) Wallace look downright prophetic.