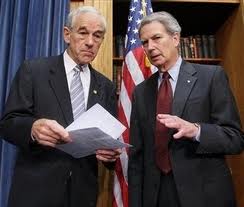 Paul said al-Awlaki, a U.S.-born Islamic cleric suspected of involvement in several terror plots, should have been afforded a trial as an American citizen.

“No, I don’t think that’s a good way to deal with our problems,” Paul told MSNBC. “Al-Awlaki was born here, he is an American citizen. He was never tried or charged for any crimes. No one knows if he killed anybody. We know he might have been associated with the underwear bomber. But if the American people accept this blindly and casually that we now have an accepted practice of the president assassinating people who he thinks are bad guys, I think it’s sad.”

“I think what would people … have said about Timothy McVeigh?” Paul continued. “We didn’t assassinate him, who certainly he had done it. Went and put through the courts then executed him. To start assassinating American citizens without charges, we should think very seriously about this.”

When asked if he felt the same way about Osama bin Laden, Paul said, “Not exactly.”

“Because he was involved in 9/11 and I voted for authority to go after those individuals responsible for 9/11. Al-Awlaki — nobody ever suggested that he was participant in 9/11.”

Never mind that Awlaki left this country to go rally Middle Eastern extremists to attack U.S. troops and commit terrorism against Americans.  The record on that is extensive.  Never mind that the nuts who blew up The U.S.S. Cole in Yemen, the two U.S. embassies in Africa, and the freak who shot up Fort Hood, Texas, all communicated with Awlaki and viewed him as an inspiration.

Paul is coming to North Carolina this week to campaign with his new best friend Walter Jones, who represents a district that includes Camp Lejuene and a lot of active duty and retired Marines.

(Did I mention that Jones, who has been the subject of flattering pieces in leftist publications like The Nation, has a GOP primary opponent? He is retired New Bern police chief Frank Palombo, and his web site is here. )

Let’s explore the argument presented by Jones’s buddy Ron Paul, about al-Awlaki being a wide-eyed innocent brutally murdered by his government:

Two days ago, a British court convicted a Bangladeshi-born British Airways employee of terrorism charges, including plotting a “spectacular” airplane bombing. The plotter, Rajib Karim, who had begun working for the airline company in 2007, led a double life. Outwardly, he appeared to be an ordinary computer expert. Secretly, however, Karim harbored extremist beliefs and made propaganda videos for Jamaat ul Mujahideen Bangladesh (JMB) — a known terrorist organization.

While working at British Airways, according to a profile published online by London’s Metropolitan Police, Karim “worked with his younger brother Tehzeeb Karim and other associates to raise funds for JMB, al Qaeda and other terrorist organizations who were then involved in the insurgent activity in Iraq, in the border areas of Pakistan, Afghanistan and also in the [sic] Yemen.”

In December 2009, Tehzeeb Karim traveled with two others from Bangladesh to Yemen, where he met with al Qaeda cleric Anwar al Awlaki. Tehzeeb told Awlaki about his older brother and the two began emailing in short order.

“We need men who are willing to go all the way and not hold back anything from Allah,” Awlaki told Karim, according to the Mirror (UK). Awlaki continued: “The religion of Allah cannot be given victory by part-time service. This is not a weekend religion. The contract is to sell our souls to Allah. The compensation is paradise.”

Awlaki’s words were clearly intended to inspire Karim to action, but excerpts of the cleric’s emails reveal that his role went far beyond rhetorical support. The emails and other information linking Karim to al Qaeda in the Arabian Peninsula (AQAP) were discovered on Karim’s laptop, which was protected by extensive cyber security.

According to the Daily Mail (UK), Karim used some of the “most sophisticated” encryption tools British authorities have ever seen to mask his communications with various nefarious personalities, including Awlaki. Investigators found that Karim used a “Russian doll system,” which “hid his terrorist plotting behind at least eight layers of disguise and encryption.”

Once authorities cracked Karim’s security, they found a series of emails to and from Awlaki. Excerpts of the emails have been widely reported by the British press.

On Jan. 25, 2010, Awlaki emailed Karim, telling him that “depending on what your role is and the amount of information you can get your hands on, you might be able to provide us with critical and urgent information and may be able to play a crucial role for the ummah.”

I was pleased when your brother conveyed from you salaams to myself and was excited by hearing your profession. I pray that Allah may grant us a breakthrough through you. As a starter, can you please answer these questions in as much elaboration as possible: can you please specify your role in the airline industry, how much access do you have to airports, what information do you have on the limitations and cracks in present airport security systems, what procedures would travellers [sic] from the newly listed countries have to go through, what procedures would a person on a watch list have to go through? …

…As Awlaki’s emails with Rajib Karim show, the al Qaeda cleric played a direct role in the airliner plot. Awlaki encouraged Karim to attack the US, settling for an attack on the UK only as a backup.

Awlaki explored Karim’s ability to get a “package” (that is, bomb) on board a US-bound plane. This possibly foreshadowed AQAP’s late 2010 cargo plane bomb plot. In that foiled attack, AQAP attempted to detonate two bombs shipped via cargo jetliners.

Awlaki also wanted Karim to discuss “limitations and cracks in present airport security systems” as well as the “procedures…a person on a watch list” would have to go through.

More than a charismatic preacher

US counterterrorism analysts and intelligence professionals initially focused on Awlaki’s ability to inspire others to commit acts of terrorism. Over time, they have come to realize that Awlaki is directly involved in AQAP’s plotting.

Awlaki’s emails to Karim show that he was intimately involved in plotting an attack on US-bound airliners. And the emails to Karim are not the only evidence demonstrating Awlaki’s operational role.

In December 2009, the same month Karim’s younger brother visited Awlaki in Yemen, an AQAP recruit named Umar Farouq Abdulmutallab tried to blow up a Detroit-bound airliner. Awlaki has publicly admitted that Abdulmutallab was one of his “students.”

In court filings last year, Director of National Intelligence James Clapper explained that Awlaki was not just a spiritual advisor for Abdulmutallab. Shortly after Abdulmutallab swore allegiance to the emir of AQAP, Nasir al Wuhayshi, he “received instructions from [Awlaki]…to detonate an explosive device aboard a US airplane over US airspace.” Awlaki was directly involved in “preparing” Abdulmutallab for the Christmas Day 2009 operation, according to Clapper.

Stuart Levey, who was then Under Secretary for Terrorism and Financial Intelligence, said in a 2010 Treasury Department press release that Awlaki “has involved himself in every aspect of the supply chain of terrorism — fundraising for terrorist groups, recruiting and training operatives, and planning and ordering attacks on innocents.”

In designating Awlaki an al Qaeda terrorist in July 2010, the Treasury Department noted that he has “taken on an increasingly operational role” in AQAP since late 2009. [See LWJ report, US adds Anwar al Awlaki to list of designated terrorists.]

Another of Awlaki’s “students” is Major Nidal Malik Hasan, who went on a shooting spree at Fort Hood, Texas on Nov. 5, 2009. Like Rajib Karim, Hasan emailed back and forth with Awlaki as he plotted his day of terror.The FBI was aware of the emails before the Fort Hood shooting. Incredibly, the Bureau dismissed the importance of the email communications, incorrectly believing that they were just part of Hasan’s research into the deleterious effects of combat in Iraq and Afghanistan.

When putting together the various pieces, a pattern emerges. In November 2009, one of Awlaki’s “students” launched a terrorist attack against military personnel inside the US. Awlaki had openly advocated such an operation beforehand. In December 2009, another of Awlaki’s students attempted to blow up a jetliner over US airspace.

Then, in January 2010, Awlaki began plotting another attack on US-bound jetliners with Rajib Karim.

Clearly, Awlaki is more than just a radical preacher.

If that’s not enough, how about this ?

Awlaki is perhaps the most notorious member of AQAP. His sermons have garnered a wide audience on the web because of his fluency in English. US counterterrorism officials have directly implicated him in recent terror plots, including Umar Farouq Abdulmutallab’s attempt to blow up Flight 253 on Christmas Day 2009 as well as Major Nidal Hasan’s attack at Fort Hood, Texas, in November 2009 that killed 13 US soldiers. Awlaki also had an operational role in the plot to blow up British Airways planes. In addition, European jihadists traveling to Pakistan are known to have met with Awlaki while traveling to Asia.

So, Walter Jones and his buddy Ron Paul are condemning our forces for killing this guy without giving him the chance to hire a sleazy lawyer and to rant against the U.S. in front of  the tabloids and the alleged mainstream media?  THIS guy does not deserve the protections of the U.S. Constitution.  He turned his back on America when he moved to a foreign country and began rallying nutjobs to murder innocent Americans and attack U.S. troops.  This is war, not the latest session of Superior Court.  The record clearly defines Awlaki as a traitor and an enemy combatant, who deserved worse than the splattering that drone inflicted upon him.