Liberals preach the gospel of spending more money to save the world and take care of EVERYONE.  The alleged conservative party in this country has a platform that suggests it favors spending less, letting people keep more of their money, and nurturing freedom.

Debate coaches and teachers will tell you you’re in trouble if you spend a lot of time making your case on the opponent’s terms.  Yet, we’re seeing case after case of reputedly conservative politicians talking issues on the left’s terms.

Take spending on public education, for instance.  Teacher unions and other assorted leftist politicos like to tell us the only way to ensure excellence for our kids is to spend MORE.  (Though, it never seems like we can spend ENOUGH to satisfy these people.)

Check out the GREAT P.J. O’Rourke’s take on this matter:

to school. Figures in the Statistical Abstract of the United States show that we are spending $11,749 per pupil per year in the U.S. public schools, grades pre-K through 12. That’s an average. And you, like me, don’t have average children. So we pay the $11,749 in school taxes for the children who are average and then we pay private school tuition for our own outstanding children or we move to a suburb we can’t afford and pay even more property taxes for schools in the belief that this makes every child outstanding.

Parents of average students believe it too. According to an annual Gallup poll conducted from 2004 through 2007, Americans think insufficient funding is the top problem with the public schools in their communities. But if throwing money is what’s needed, American school kids are getting smacked in the head with gobs of cash aplenty. That $11,749 is a lot more than the $7,848 private school pre-K through 12 national spending norm. It’s also a lot more than the $7,171 median tuition at four-year public colleges. Plus $11,749 is much less than what’s really being spent.

In March the Cato Institute issued a report on the cost of public schools. Policy analyst Adam Schaeffer made a detailed examination of the budgets of 18 school districts in the five largest U.S. metro areas and the District of Columbia. He found that school districts were understating their per-pupil spending by between 23 and 90 percent. The school districts cried poor by excluding various categories of spending from their budgets—debt service, employee benefits, transportation costs, capital costs, and, presumably, those cans of aerosol spray used to give all public schools that special public school smell.

Schaeffer calculated that Los Angeles, which claims $19,000 per-pupil spending, actually spends $25,000. The New York metropolitan area admits to a per-pupil average of $18,700, but the true cost is about $26,900. The District of Columbia’s per-pupil outlay is claimed to be $17,542. The real number is an astonishing $28,170—155 percent more than the average tuition at the famously pricey private academies of the capital region.

School districts also cheat by simple slowness in publishing their

Bell bottoms and Jerry Rubin hair versus piercings and tattoos—are kids getting smarter? No. National Assessment of Educational Progress reading test scores remained essentially the same from 1970 to 2004. SAT scores in 1970 averaged 537 in reading and 512 in math, and 38 years later the scores were 502 and 515. (More kids are taking SATs, but the nitwit factor can
be discounted—scores below 400 have decreased slightly.) American College Testing (ACT) composite scores have increased only slightly from 20.6 (out of 36) in 1990 to 21.1 in 2008. And the extraordinary expense of the D.C. public school system produced
a 2007 class of eighth graders in which, according to the NAEP, 12 percent of the students were at or above proficiency in reading and 8 percent were at or above proficiency in math. Many of these young people are now entering the work force. Count your change in D.C. […]

Here in North Carolina, the Moral Monday rabble, The Round Rev, the NCAE, and their enablers in the drive-by media are pounding away on a narrative that: (1) more money while doing the same old thing equals educational excellence, and (2) the mean ol’ Republicans want to short-change the lil’ children.

Republican leaders have been pointing out the falsehood of point (2).  See this video from Lt Gov. Dan Forest, this essay from state Rep. David Lewis, and this Tweet from Lewis: 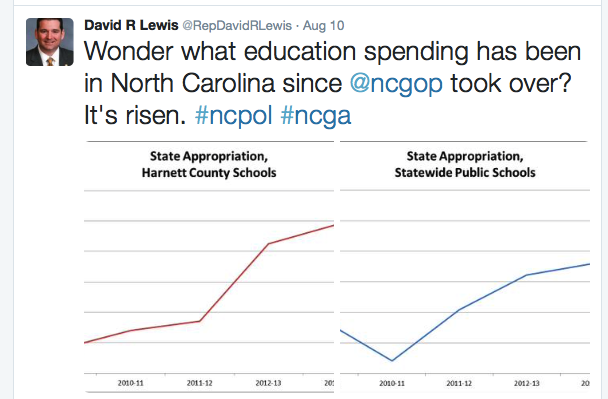 Is THAT really something to celebrate? That we’re spending MORE money for little to no positive results?  Tossing more money into “The War on Poverty” didn’t exactly turn the situation around. We have generation after generation living on public assistance.  There are more people — a greater percentage of the population — in poverty since “The War” began.  We keep throwing more money at that situation, and poverty keeps hanging around.

It appears the GOP has decided to accept the point that more money will “fix” the public schools.  That’s a real shame when we have people like Terry Stoops and John Tedesco on our side making some seriously good points about reforming public education so we get a bigger bang for our bucks.

Yet the educrats appear to have the governor’s ear.  McCrory lines the board of education with people who think Common Core is great and that we can’t spend enough money.  His closest advisors on education love Common Core and are in thick with the educrat class.

Much of the action on Jones Street regarding education seems to mirror the agenda of the educrats.

It’s great the NCGOP is calling the drive-by bluff on education spending.  But why not widen the discussion to spread our overall philosophy, about transferring power from the government to the people and increasing fiscal responsibility, to the public education arena?

2 thoughts on “Education spending: Surrendering on the Mo’ Money meme?”