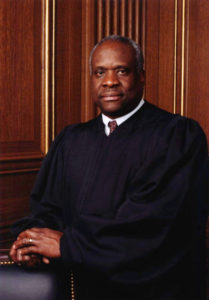 George H.W. Bush;’s one term as president was quite the downer.  But one of the best things he did was standing by — and fighting for — the elevation of Clarence Thomas to the US Supreme Court.  Thomas took quite a beating to get there.  But he’s been one of the real vanguards of constitutionalism, freedom, and limited government during his time on the court.

We opined recently about the high court’s outrageous decision against regulating abortion clinics just like every other outpatient surgery center in America.  Here’s the opinion in full.

One of the handful of lawyers that we truly like pointed out to us some of the more interesting points in Justice Thomas’s dissenting opinion:

* Today the Court strikes down two state statutory provisions in all of their applications, at the behest of abortion clinics and doctors. That decision exemplifies the Court’s troubling tendency “to bend the rules when any effort to limit abortion, or even to speak in opposition to abortion, is at issue.” Stenberg v. Carhart, 530 U. S. 914, 954 (2000) (Scalia, J., dissenting). As JUSTICE ALITO observes, see post (dissenting opinion), today’s decision creates an abortion exception to ordinary rules of res judicata, ignores compelling evidence that Texas’ law imposes no unconstitutional burden, and disregards basic principles of the severability doctrine. I write separately to emphasize how today’s decision perpetuates the Court’s habit of applying different rules to different constitutional rights— especially the putative right to abortion.

* Ultimately, this case shows why the Court never should have bent the rules for favored rights in the first place. Our law is now so riddled with special exceptions for special rights that our decisions deliver neither predictability nor the promise of a judiciary bound by the rule of law.

* The majority’s furtive reconfiguration of the standard of scrutiny applicable to abortion restrictions also points to a deeper problem. The undue-burden standard is just one variant of the Court’s tiers-of-scrutiny approach to constitutional adjudication. And the label the Court affixes to its level of scrutiny in assessing whether the government can restrict a given right—be it “rational basis,” intermediate, strict, or something else—is increasingly a meaningless formalism. As the Court applies whatever standard it likes to any given case, nothing but empty words separates our constitutional decisions from judicial fiat.

* The Court should abandon the pretense that anything other than policy preferences underlies its balancing of constitutional rights and interests in any given case.

* Today’s decision will prompt some to claim victory, just as it will stiffen opponents’ will to object. But the entire Nation has lost something essential. The majority’s embrace of a jurisprudence of rights-specific exceptions and balancing tests is “a regrettable concession of defeat—an acknowledgement that we have passed the point where ‘law,’ properly speaking, has any further application.” Scalia, The Rule of Law as a Law of Rules, 56 U. Chi. L. Rev. 1175, 1182 (1989). I respectfully dissent.

2 thoughts on “Clarence Thomas NAILS IT in TX abortion dissent”