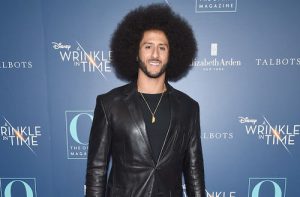 Here’s another report about the move from kneeling to arm-locking in the pros:

[…] NFL players had been kneeling during the national anthem as a protest against racial injustice, but last weekend featured a mass response to President Donald Trump, who called for those who kneel to be fired. Teams responded with extensive protests, from more kneeling to locking arms to staying off the field during the opening ceremony.[…]

Here’s an article about high school athletes linking arms and kneeling during the playing of the National Anthem.  Here’s another article about college athletes locking arms during the anthem as a protest against “police brutality” and for racial and social justice.

The interlocking of arms by the Central Carolina Community College basketball team and coaches is an act that has happened at each game for the entire 2018-2019 season and is in no way a political or social statement or protest.

This act is a show of unity and solidarity amongst players and coaches for team bonding before their pending athletic match and the College supports them in doing so.

I played sports in school.  We showed respect during the anthem — removing helmets and placing hands over the  heart while 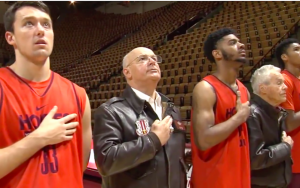 standing at attention.  The players for Sandhills Community College and their coaches — as well as the fans in the stands — managed to display proper decorum during the anthem Wednesday night.

Here’s an excellent article about the Virginia Tech men’s basketball coach holding seminars for his players on how to behave and show respect during the National Anthem.

It might be wise for the Central Carolina team to find some other way to demonstrate “unity” that does not involve injecting personal political agendas and disrespect into the performance of  our National Anthem.