In the wake of the CRomnibus travesty, we got hit with a lot of spin from go-along, get-along Republicans:

No money has been approved for implementation of amnesty. We funded the government so we can come back and smack this down in the beginning of the new year. Relax.  We got it covered.

Well, it appears a bit of a hiring spree for the implementation of amnesty has already begun:

While conservative are angling to defund President Barack Obama’s executive amnesty, the administration is already at work creating the new infrastructure that will implement its unilateral changes to immigration law.

Shortly after Obama announced the executive actions on immigration, Citizenship and Immigration Services (USCIS) revealed it would be opening “a new operational center” in Crystal City in Arlington, VA to house 1,000 new “full-time, permanent federal and contract employees.”

“The initial workload will include cases filed as a result of the executive actions on immigration announced on Nov. 20, 2014,” the USCIS bulletin issued on Dec. 1 read.[…]

*But, but, but Patrick McHenry, Rich Hudson, Virginia Foxx and Renee Ellmers were all telling us that there was NO money to DO THIS! We had nothing to worry about, they assured.*  MORE:

At the time, Sen. Jeff Sessions (R-AL) called the facility, “a clear symbol of the President’s defiance of the American people, their laws, and their Constitution.”

“The President cannot spend money unless the Congress approves it, and certainly the Congress should not approve funds for an illegal amnesty,” Sessions added on Dec. 3.

Providing offices and salaries for these new employees will cost an estimated $48 million, according to a Christmas Day report in The New York Times. It adds that the government will be spending almost $8 million annually in lease payments and some $40 million in annual salaries.

The Times reports that at a recent speech in Los Angeles, USCIS Director León Rodríguez said that 5,000 people have already applied for the new immigration jobs.

Administration officials argued in the report that the salaries and lease would be covered by fees acquired from processing the millions of illegal immigrants who apply for Obama’s protected status. They said the goal is to be providing papers and work authorizations to illegal immigrants within months. […]

I swear this sounds a lot like the BS we got served up during the early stages of the Tea Party and the ObamaCare fight.  We can’t shut down the government.  Let’s get stuff passed and deal with it later.  It’s been FOUR YEARS since we gave the GOP power in DC based on the promise to kill ObamaCare.  Now, we keep getting told how tough it is to kill ObamaCare. Apart from Ted Cruz and a handful of others, NO ONE is seriously taking a stab at killing the ObamaCare beast.  We get a bunch of crap about “amending” or “fixing” it, while the beast continues to ravage our economy. 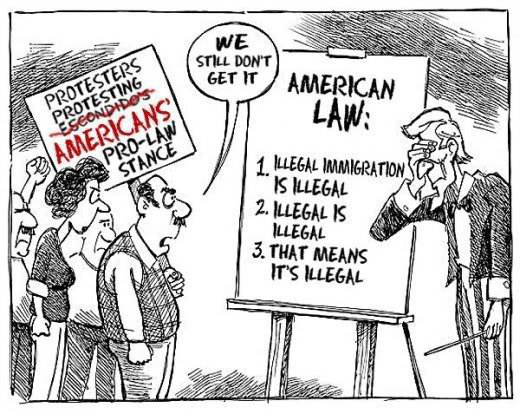 They’re pulling out the same playbook for amnesty.  And why not?  This strategy worked so well for them with ObamaCare.  We are stuck with two parties dominated by people who aren’t interested in saving our country.  They’re too busy fighting over who gets to spend our money and control our lives.

Keep holding your nose.  Keep smiling and nodding your head. Keep marching to the polls to re-hire these scoundrels every two years.  Maybe you’ll get a pat on the head, tossed a few coins, and a new government program to “take care of” you and your family.  If we allow this criminal conspiracy to continue AS IS, there may not be much left of America to fight FOR.

4 thoughts on “Amnesty & CRomnibus: Is the lie unraveling ALREADY ????”