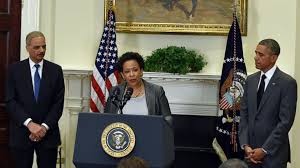 No, we’re not talking about The Coal Miner’s Daughter.  We’re talking about the low-key New York prosecutor nominated by BarryO to replace the godawful, horrific Eric Holder as US Attorney General.

When Republican presidents nominate conservatives to various federal posts, Democrats in Congress go to war.  They’re loaded for bear.  They destroyed Robert Bork.  They tried to decimate Clarence Thomas.  They made now-Justice Samuel Alito’s wife cry at the confirmation hearing.

Republicans are the exact opposite with Democrat presidents.  They play oh so nice with the hope that Democrats will return the courtesy when the GOP gets The White House.  (It RARELY ever happens.)  Obama has already appointed 1/3 of the existing federal judiciary.  (Add those folks to the Carter and Clinton appointees still hanging on.) Recent bizarre federal court rulings finding a constitutional basis for things like gay marriage and ObamaCare, really hammer home the seriousness of that accomplishment.

Obama put forward two grossly unqualified nominees for the US Supreme Court — Kagan and Sotomayor — and you had Republicans falling all over themselves to support them.

Well, Ms. Lynch has been nominated for the nation’s highest law enforcement post and the GOP praise for her is flooding in.  The Heritage Foundation’s Hans von Spakovsky, one of the top legal minds on the conservative side, has raised some serious issues about Ms. Lynch that Republicans SHOULD BE expressing concern about: 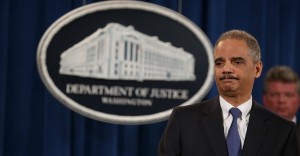 That makes it even more important the Senate do a thorough review and vetting of her nomination by President Obama to be the new attorney general.

This is particularly true for those who understand how important the rule of law is to our constitutional system, something that Holder has damaged during his tenure. […]

[…] Lynch, who is the U.S. attorney for the Eastern District of New York (which includes Brooklyn, Queens, Staten Island and Nassau and Suffolk Counties), has made it clear that she would continue Holder’s war on election integrity.

In a speech at the Long Beach Martin Luther King Center in New York in January, Lynch claimed that efforts to improve the integrity of the election process were an attempt “to take back” what Martin Luther King, Jr. had fought for and that state legislatures were trying to “reverse” the gains made in voting.  Lynch made it clear she approved of the Justice Department’s lawsuits against states such as North Carolina to stop voter ID laws and changes in early voting and same-day registration rules, saying such suits “will continue.”

In her speech, Lynch apparently did not realize the irony of standing in front of a picture of Nelson Mandela while making this false claim against voter ID laws, given that South Africa has a much stricter voter ID requirement that was supported by Mandela.  Members of the Senate owe it to voters to question Lynch intensely on this issue and should be troubled at the prospects of anyone who would continue Eric Holder’s policy of going after states for trying to protect the integrity of the election process.[…]

On the death penalty, von Spakovsky notes that Lynch’s views are not far off from those behind North Carolina’s Racial Justice Act — a law that tried to inject racial quotas and ”affirmative action” into capital murder court cases and convictions.  The RJA — put into place by Democrats — got crippled by the Republican majority that took over in Raleigh in 2011.

Von Spakovsky points out Lynch’s predisposition toward inserting race into just about everything:

[…] The death penalty, voter ID and Lynch’s seeming-acquiescence to the recommended “Action Items” in the COPS report also bring into sharp focus an important issue: Lynch’s view towards the dubious legal theory of disparate impact that, as the Wall Street Journal has said, Eric Holder has used to “coerce settlements from banks and other businesses based on statistics but no proof of discrimination.”

That opinion also sharply criticized the actions of another former Justice Department official, Thomas Perez, the current head of the Department of Labor, who also had been discussed as a possible replacement for Holder until Lynch got the nod.  The court cited a congressional report that Perez placed “ideology over objectivity and politics over the rule of law” in settling a case raising this same issue in order to get the case off the Supreme Court’s docket.

Lynch needs to be questioned on whether she believes disparate impact is a legitimate legal theory under federal civil rights law and whether she believes that settling a case the U.S. Supreme Court had agreed to hear in order to avoid the court ruling on the legitimacy of that legal theory is acceptable behavior in a senior Justice Department official.  The answer to both of those questions–or an attempt to avoid answering them–would be quite revealing about both her legal views and her ethical standards. […]

Oh, and let’s not forget how closely tied Lynch is to Eric Holder.  You know, the guy who has been making stuff up as he goes along.  The guy who fanned the flames that led to the travesties in Ferguson and NYC.  : 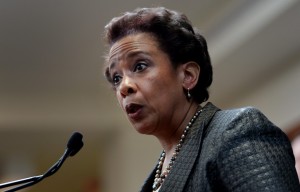 Lynch also has been a member of the attorney general’s advisory committee of U.S. attorneys. Given the criticism of Eric Holder’s behavior on a host of issues, from his refusal to defend the constitutionality of federal laws such as the Defense of Marriage Act, to his refusal over the past seven months to enforce the contempt citation issued by the House of Representatives against Lois Lerner in the IRS investigation, to his overly broad assertion of a privilege claim and refusal to turn over documents related to Operation Fast and Furious (including emails with his wife and mother), Lynch has an obligation to inform senators what advice, if any, did she give the attorney general with respect to those issues.  Even if it turns out that she did not advise Holder on these issues, since she would occupy the same position he had, she should be asked whether she agreed and still agrees with those actions.

That brings up a subject raised by Sens. Ted Cruz, R-Texas, and Mike Lee, R-Utah. They recently called on Lynch to state “whether or not she believes the president’s executive amnesty plans are constitutional and legal.”  One of the unique duties of the attorney general is his or her obligation to advise the president against taking actions that are unconstitutional or violate federal law. Lynch should be questioned about the president’s unilateral actions, including his actions on immigration, to see whether she actually believes in the limits the Constitution imposes on the executive, or whether she will simply step into Eric Holder’s shoes and help the administration continue to defy the rule of law.

Why does this all matter?:

The attorney general heads one of the most powerful executive branch agencies in the federal government–one that has enormous discretionary power to pursue people accused of breaking the law and to exert major influence over social, economic and national security policies by the choices its leader makes in enforcement.  It requires someone who understands that while the attorney general is a political appointee, he or she has a sworn duty to uphold the Constitution and enforce the law in an objective, unbiased, nonpolitical manner.

The Senate, in its advice and consent role, also has an obligation to determine whether Loretta Lynch understands and will perform that duty before it decides whether to confirm her as the next attorney general of the United States.

This will be one of the first true tests of incoming senator Thom Tillis.  Richard Burr has already shown himself as a surrender monkey.  He’s usually wherever McCain and Grahamnesty (RINO-SC) are.  McCain is already praising her.  Grahamnesty is raising some questions, but will likely fall in line with his geriatric buddy.

Republicans have repeatedly let us down on ObamaCare.  They are on the way to disappointing us on amnesty.  THIS is something that needs a stand to be taken.  Lynch is clearly Holder in a dress.  Will the Senate GOP once again play politics and play nice, or will they stand up and demand some respect for The Constitution and rule of law?

8 thoughts on “Loretta Lynch: The NEXT GOP surrender?”