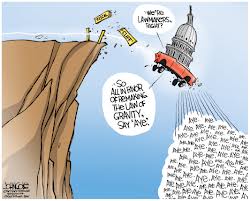 The mainstream media is breathlessly counting down to New Year’s Day, when the so-called fiscal cliff kicks in.  The fiscal cliff is the name given to the penalty written into the 2011 legislation that raised the federal debt ceiling.   There were supposed to be spending cuts in conjunction with that increase.  If the Congress didn’t make the cuts themselves, this legislation would automatically institute some DRASTIC cuts (hence, the fiscal cliff).
(Oh — by the way — we’re scheduled to HIT that debt ceiling WE JUST RAISED LAST YEAR on Monday.)

The media is trying to put the blame for our current economic predicament on the GOP and its *silly* insistence on refusing to raise taxes.   “Dingy Harry” Reid’s spokesman says — with a straight face — that the whole problem here is due to Republican “knee-jerk obstruction.”  (Never mind that Reid’s party controls two-thirds of this process.)  The real issue here is two-fold: (1) professional politicians buying job security from us WITH OUR OWN MONEY and (2) OUR  REFUSAL to hold these people accountable at the ballot box.

This whole discussion about raising taxes on the rich is nothing but political gamesmanship.  It solves NOTHING.  Confiscating ALL of the money of EVERY millionaire in this country would run our government — at its current size — for about ONE MONTH.   The current proposal on the table in DC to raise taxes on people making $400,000 or more would rake in an amount of revenue roughly equivalent to the Hurricane Sandy relief bill moving through the Congress.  A drop in the bucket.
Have you seen all of the stories about the Swiss and Caribbean accounts holding millions and billions of Facebook, Apple, and Google money?  Executives from those companies enthusiastically backed Obama at the ballot box.  But they LIKE being rich.  They got rich by being smarter than politicians and bureaucrats who produce nothing but job- and economy-killing regulations and legislation.  These guys have got the bucks to hire the best lawyers and CPAs to help them find loopholes or move their money overseas.

We’re on a path to destruction.  We’ve got a government declaring war on the very people we need to count on to invest in businesses and spur economic growth.  Part of me thinks going over this so-called cliff would be a good thing.  I know that the country and an awful lot of its citizens would experience some serious pain.  But sometimes you need to hit rock bottom to change course and kick a bad habit.

Look at the philosophy followed by experts who help people kick bad, addictive habits like alcoholism and drug abuse.  They will tell you that you can’t help these people until they hit rock bottom, realize they need help, and ASK for help.  Maybe that’s what this country needs — a trip to the economic rock bottom that wakes people up and FORCES dramatic changes in the way our government and society functions.