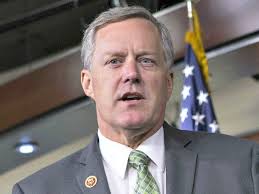 Congressman Mark Meadows collected a lot of new fans with his recent tussle with John Boehner and crew.  An effort has arisen to encourage Meadows to forego election to the House in 2016 and primary incumbent US senator Richard Burr.

Well, certain developments in DC have me thinking that primary matchup might be looking less and less likely:

A critical bloc of House conservatives has been invigorated by its victory over GOP leaders, who caved in a high-profile fight over a punished subcommittee chairman.

The reinstatement of Rep. Mark Meadows (R-N.C.) is a small win for the months-old Freedom Caucus. But it could have broader implications when House Republicans pick a new leadership team after the 2016 elections.

While Freedom Caucus founders insist they aren’t focused on next year’s contests, the cluster of about 50 conservative rebels is gaining clout in the conference and will surely have a role to play if there’s a choice presented to members.

[…]  The Freedom Caucus could be uniquely positioned to be a kingmaker in the next round of leadership contests.

Since its founding earlier this year, the group of approximately four dozen members has seen its stature grow, even as it keeps its membership a secret.

The fight over Meadows also suggests the Tea Party rebels, long an irritant to Team Boehner, are growing more organized.

To help Meadows reclaim his gavel, caucus members with backgrounds in the weeds of parliamentary procedures hit the books and discovered that GOP conference rules only allow a committee chairman to appoint subcommittee chairmen if a majority of the panel’s members don’t object. Oversight Committee Chairman Jason Chaffetz’s panel, they noted, was packed with Freedom Caucus members and their allies, including Rep. Jim Jordan (R-Ohio), a leader of the group.

Armed with that knowledge, conservatives realized they could force Chaffetz (R-Utah) to reinstate Meadows, who had been removed for bucking GOP leaders on a crucial trade vote.

Over the course of several discussions, including a late-night meeting in the basement of Capitol Hill’s Tortilla Coast restaurant, Jordan and other caucus members hatched a plan: Call a closed-door, members-only meeting of the Oversight Committee and demand that Chaffetz reinstate Meadows. Otherwise the Subcommittee on Government Operations would remain leaderless, caucus members said.

“They went to the books and looked up the rules and realized that we have rights,” Rep. John Fleming (R-La.), another caucus co-founder, said in a phone interview Wednesday. “A committee chairman can’t just do anything he wants to do, even when directed by the Speaker.”

The Freedom Caucus was formed, in part, to take on the larger Republican Study Committee, which many members felt had grown too cozy with leadership and too big for its own good. The new invite-only caucus provided conservatives with a political infrastructure, including a small staff and weekly meetings, that’s helped improve communications and strategy.

This crew went to the mat for Meadows.  It sounds like they’ve got a pretty sizable rebel faction within the House GOP caucus.  They made Boehner blink at least once.  Maybe they’ll do it again.

It sounds like they’ve got big plans to remake the caucus and the House.  If Meadows were successful in ousting Burr, he’d have a lot less help in the upper chamber.

I have no inside information on Meadows’s thinking on this matter.  He’s got to be flattered by the draft movement.  If he gives up his House seat, and is unsuccessful in his run at Burr, he has no platform left from which to push his conservative message.  If he wins, and joi

ns Thom Tillis and the gang in the Senate, it may feel like a step back for him.  The Tea Party appears to be making real inroads in the House.  And Meadows stands to be at the forefront of that tidal change.

Make no mistake. We’d like to see Richard Burr out of government.  He’s been a huge disappointment.

We need to get to work cultivating some bright young talent to move up the ranks in government.  There are some promising young conservatives in the General Assembly (and out there in local governments) who could have a seat in Congress in their futures.

If this gang in the Freedom Caucus has their way and fundamentally changes the chamber that controls the federal government’s purse-strings, staying in the House might be too good of an opportunity for Meadows to give up.

4 thoughts on “A potential monkey wrench in the Draft Meadows effort?”