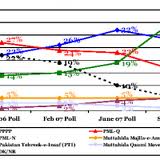 Over the past couple of days, there have been a few misleading stories in the N&O regarding political poll numbers.  I am going to assume the best — that Rob Christensen and the other folks in the N&O newsroom don’t understand how to read an opinion poll.  (Surely, they would not be spinning the numbers to mislead their readers in favor of the Democrats.)

The latest headline, in today’s paper, reports “Obama’s numbers under water in NC.”  OK.  I’ll accept that.  Rob has created ANOTHER story based on the recent poll released by Public Policy Polling of Durham.

It comes at a time when there continues to be bad unemployment numbers, and perhaps some of the glow of the killing of Osama Bin Laden is wearing off. It also comes at a time when an independent group and the Republican Party have begun TV advertising campaigns in the state attacking the Obama economic record.

First, I have to object to Christensen’s description of PPP as “Democrat-leaning.”  Boy, that’s an understatement.  That’s like calling the shark in “Jaws” or Jason in the “Friday the 13th” movies  “somewhat aggressive.”   That’s like calling Venezuelan strongman Hugo Chavez “left-of-center.”

Later, Rob seems to either (a) get confused or (b) try too hard to spin the poll for the Democrats:

In earlier polls, Obama had been beating all of his prospective Republican opponents. But in the latest poll, Obama is tied with former Massachusetts Gov. Mitt Romney at 45 percent.

About the only thing in Obama’s favor, is that most North Carolina voters don’t think much of the Republican candidates either. Bachman has a 34/42 favorability/unfavorability rating; Cain has a 24/36 rating, Romney has a 32/47 rating, Pawlenty has a 19/40 rating an Palin has a 35/57 rating.

The survey of 651 North Carolina voters was conducted July 7-10 and had a margin of error of plus or minus 3.8 percent.