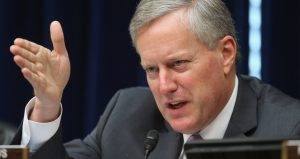 The Republican Party’s platform at the national and state level talks oh so nice about appreciating the free market.  But a lot of that doesn’t mesh with the rhetoric coming out of DC Republican leaders’ mouths.  In about three weeks, they will control both ends of Capitol Hill AND The White House.  But we’re still getting the same kind of foot-dragging and whining we heard when Obama AND Harry Reid controlled two of those three.  *Repeal and Replace! No need to rush!*

Part of it is general political mealy-mouthed wussiness.  It’s sooooooo much easier to give people stuff.  People love you when you do that.  But taking something away?  People get mad.  *Gotta keep the sheep content.*

Another part of it?  Minimize the controversy ahead of what looks like a nice upcoming election cycle for Republicans.  There are 33 seats up for grabs in the US Senate in 2018. Only EIGHT — Arizona, Wyoming, Texas, Utah, Tennessee, Mississippi, Nevada, and Nebraska — are held by Republican incumbents.  Of the remai

ning TWENTY-FIVE,   a total of SEVEN have Democrat incumbents in states that went for Trump or are otherwise very competitive for the Republican Party.  The GOP starts off 2017 with a 52-48 majority (Mike Pence breaking ties) in the Senate.  Holding all current seats and adding those seven would put the GOP at 59-41 with Pence adding a 60th vote.  Those nervous nellies don’t want to rock the boat.  They looooooove their committee chairmanships.  (Never mind that the GOP got where they are by pledging to trash ObamaCare way back in 2010.)

[…] The Republican congressman who made his name as the instigator of John Boehner’s ouster last year was set to take the reins of the House Freedom Caucus on Monday night.

The proposal “will meet with major resistance from Freedom Caucus members,” the North Carolina Republican vowed in an interview, calling it “the first big fight I see coming for the Freedom Caucus.”

“It should be repealed and replaced, and all of that should be done in the 115th Congress” — the two-year period starting in January through 2018 — and “not left to a future Congress to deal with,” Meadows added. […]

Hooray for calling them out on THREE YEARS.  But WHY does there need to be a “replacement”?    Anyone in the medical field will tell you the rise in red tape directly corresponds to the rise in cost and the decrease in efficiency in health care delivery.  Here’s a hospital bill from 1960 showing that having a baby at the hospital cost a whopping $230.  Today, THAT might cover the cost of a syringe.

I am not that old.  But I can remember doctors actually coming by your house.  I can remember paying cash for doctor visits.  The deeper government has sunk its talons into this important sector of our economy, the more unaffordable and frustratingly inefficient it has become.

Kill ObamaCare.  Drop the interstate market barriers.  Let all the players who want to get in the game do so.  Sure, the government — the judicial branch specifically — needs to referee to ensure we aren’t getting taken for a ride by deceptive business practices and lives aren’t being put at risk.  But, increasing the number of providers of health care and health insurance will drive prices down and increase the quality of service.  It’s done so every time its been allowed in other sectors of the economy.

History has shown its nearly impossible to kill off an entitlement once the government kick-starts it.  Social security was meant to help old folks survive the Great Depression.  (And here it still is — bankrupting us.)  Medicaid and Medicare were instituted to help “end poverty in our lifetime.”  Here we are 52 years later — spending more money than ever on those two with an exponentially-

Kill ObamaCare. There will be some pain.  Kind of like weaning addicts off of crack.  But in the end, it’s going to be much better for everyone.

14 thoughts on “WHY can’t the GOP trust the market on health care?”