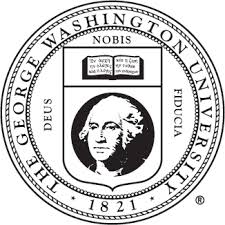 Okay. I grimaced and just dealt with the Jimmy Hoffa memorial professorship.  Then came the “mandatory LGBT sensitivity training” for all student organizations.  (You get shut down and kicked off campus if you refuse to participate.  How sensitive is that?)

There has been a major effort to refer to the university as “GW” to help disguise the name of that *white patriarchal slave-owning racist male.*   The idiots in the faculty and administration have even tried to change the athletic mascot from a Revolutionary War-era American soldier to — get this — A HIPPO.  (The school’s teams are called “The Colonials.”)

* A hippo makes so gosh-darned much sense.*

Now, we’re finding out that the university in our nation’s capital — named for the father of our country — is dropping US history as a requirement for History majors:

One of President-elect Donald Trump’s top aides is raising questions about the elimination of a requirement for history students at George Washington University.

Kellyanne Conway, who served as Trump’s campaign manager during his campaign and was announced last week that she will become the White House counselor for the Trump administration, took to Twitter Wednesday morning to take issue with a report that the university is lifting its requirement for history majors to take a U.S. history course.

Critics like national radio host Larry Elder said this move is dangerous because he believes students are arriving at college from high schools without a balance education in American history. 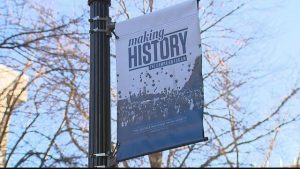 “Kids are learning that America is nothing more than a series of incidents that oppress people, whether it’s Native Americans or women or Blacks or Hispanics or Asian people, that is what they are learning,” Elder said.

On George Washington University’s campus, some students and visitors are also questioning the logic.

“That would be a little iffy because then you are not getting the actual history learning that you should be getting as a history major,” said one man we spoke with.

“I would definitely stand strong on [having] an American history class,” said another. “I think it’s very important. If that is going to be your major, it’s important to have that.”

In a statement, George Washington University is defending the change and emphasizing its program now has “broadened to reflect a more globally connected world.” The statement also said a separate department offers an American studies program that allows students to “delve into the culture politics and history of the U.S.”

They were peddling this “global university” crap even when I was an undergrad there.  Look. The place is named after the father of our country.  If the goal is to make this the flagship university in America, WHY NOT emphasize what makes this place so great? 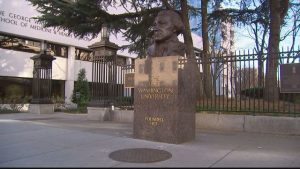 George Washington University was sliding into the P.C. sewer when I was there. and it now appears to be treading water just fine in that muck.  (It’s interesting that the critics of the university interviewed in the story did not allow their names to be used for the story.  The leftist majority on that campus would crack down oh so hard on anyone who dares to criticize their agenda.)

GW won the college basketball post-season NIT tournament last season.  I followed the action intensely on ESPN.  It was nice, for a change, to have something to feel positive about in regard to my alma mater.  How did the P.C. crowd back on campus deal with it all?  They FIRED the head coach.  The winningest head basketball coach since Red Auerbach’s playing days.

The offense?  A couple of players made anonymous complaints to administrators that the coach was “mean” to them.  There was also an anonymous report that the coach made a negative comment, in front of players, insinuating that the athletic director was, um. “less than heterosexual.”   Animal Farm and 1984 come to the basketball court.