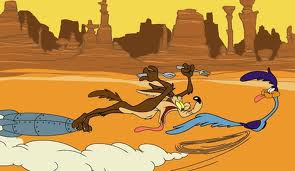 So far, this campaign cycle, Pat McCrory is The Roadrunner, and the alleged mainstream media is Wile E. Coyote.  Just like ol’  Wile E., the media keeps trying to set traps for  McCrory and ends up  failing miserably.

The statewide media are petrified that a GOP takeover of state government is looking more and more likely.  So, they are pulling out all stops to help their comrades on the left.

The latest ploy is to suggest that McCrory is tiptoeing around the whole Amendment One issue — fearing that he will offend his “moderate base” in Charlotte:

He’d rather talk about something else – say, the economy or education.

But press Pat McCrory about gay marriage, and the presumptive Republican nominee for governor will say this much – and little more: On May 8, he plans to vote for the proposed N.C. constitutional amendment reaffirming the state’s ban on same-sex marriage.

That puts him in line with evangelical Christians and other parts of the GOP’s conservative base, who back the so-called marriage amendment by large margins.

But it sets him apart from some leaders in Charlotte’s business community and from many moderate voters – the very groups that formed McCrory’s base during his many years as mayor of Charlotte.

Prominent Charlotte Republican Sally Robinson, for example, said it was unfair to same-sex couples who want to build a life together.

Her husband, attorney Russell Robinson, argued that the “poorly worded” amendment would invite federal lawsuits and have unintended consequences.

And top Bank of America executive Cathy Bessant, who is unaffiliated, said passage of the amendment would be “disastrous” to North Carolina’s business climate. She held a fundraiser for McCrory in her home last year.

All three spoke on videos posted by the amendment’s opponents.

The three major Democratic candidates for governor also are against the amendment.

McCrory, meanwhile, has managed to keep a low profile on this issue that has divided the state – and the country.

But when asked – usually by the press – he has stuck by his support of the proposed amendment.

What would The Observer have the man do?  Drive down every main street in every one of the state’s towns with one of those old-fashioned loudspeaker trucks screaming his opposition to anyone in earshot?
The reporter claims the issue is “dividing” the state.  Most of the polls I see — where the issue is honestly presented — show the amendment with 60 to 75 percent support.
It’s divided the state — with supporters overwhelmingly outnumbering opponents.
(For what it’s worth, we STILL can’t get our local paper here in Moore County to print the actual text of the amendment.)
It’s interesting that this reporter admits that the only questions to McCrory about Amendment One are coming from THE PRESS.  It’s as though they are trying to set up THIS NARRATIVE: Look out, people! The crazy church people are taking over !!!
It’s also interesting that the moderate opponents of the amendment, cited by The Observer reporter, all say they still plan to vote for McCrory.  So — there goes the thesis of the article, right out the window.
You claim that supporting the amendment is a political killer.  Give us some evidence, or move on to something else.