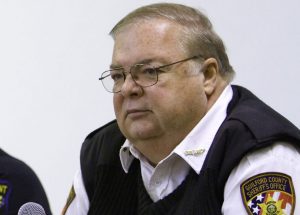 I first met the current Guilford County sheriff way back in 1988.  He struck me as a no-nonsense, tough-as-nails ‘Dirty Harry’ kind of cop.  In fact, one of my fondest memories of him was a story he told about flying somewhere to pick up a convict to extradite him back to North Carolina.  The convict was apparently dangerous.  Barnes said he took the inmate onto the plane in handcuffs.

The flight crew did not like THAT, or the fact that Barnes was armed.  They made him remove the handcuffs and unload his weapon.  Barnes, as expected, felt uncomfortable disarming himself and removing restraints from a dangerous convict on a crowded plane.  Barnes said he laid down the law with the newly-unrestrained convict: Sit on your hands for the duration of the flight.  If I even get a peek at one of your fingers, you will no longer be flying the friendly skies.  (They will become most unfriendly.)

THAT memory of Barnes flies in the face of what I am seeing in Triad City Beat and Triad Conservative.   Apparently, the Republican lawman is not playing nice with federal immigration authorities:

The Guilford County Sheriff’s Office’s policy on immigration detainers had been set since September 2014.

But in December 2016 a new shift commander who had recently joined the staff at the Greensboro Jail questioned whether there was flexibility to allow US Immigration and Customs Enforcement, or ICE, extra time to pick up an undocumented inmate who had served time, posted bond or otherwise resolved their criminal charges.

Matt Mason, the previous sheriff’s attorney, had established the policy in September 2014, writing in an email to command staff: “Based on recent legal developments, it is my recommendation that our detention facilities not hold inmates under ICE I-247 detainers once the inmate is otherwise entitled to be released unless ICE has and can produce a copy of (1) an outstanding criminal (not civil) arrest warrant, or (2) a valid court order directing the inmate’s detention.”

Mason and his successor, Jim Secor, have concluded that holding inmates violates the Fourth Amendment Constitutional guarantee against unlawful search and seizure, and that holding undocumented inmates beyond their normal release date could expose the sheriff’s office to legal liability.

So, we’re granting constitutional protections to non-citizens?  What’s the point of becoming a US citizen if you get all the benefits ANYWAY?

[…] “Any adverse consequences that could attach to a decision to hold an [inmate] beyond the disposition of his local criminal charges, will fall on us as I am certain the feds will grab the last available chair when the music stops and leave the GCSO standing by itself,” Secor wrote in a Dec. 7 email.

You are talking about inmates who can disappear into the ether rather quickly once they are discharged from the county jail.  Fake IDs.  Temporary or false addresses.

“I am hopeful that our new president may actually honor his Constitutional obligation,” he added. “If so, our policy could change shortly but not just yet.”

The decision for the sheriff’s office to not cooperate with ICE didn’t come without serious deliberation, Secor said.

“It is a difficult course to steer,” Secor told Triad City Beat. “The charges they are being held on are rather significant charges. These are not people who were being held for no driver’s license or expired registration. On the flip side, we’ve looked at this thing and have come to the conclusion that holding someone for 48 hours on a detainer absent some kind of judicial signature is going to violate the Fourth Amendment.”

ICE receives a notification every time a fingerprint obtained through intake triggers a match in a federal database for immigration offenders. Secor said ICE typically sends an immigration detainer that winds up in the inmate’s file, adding that federal agents rarely make it to Greensboro in time to pick up undocumented inmates before they’re released from custody.

“Their office is in Charlotte,” Secor explained. “For them to make it here in time to get somebody, it’s rarely going to happen. That’s where ICE would see the sheriff’s office as deviating from complete compliance with the detainer process.”

Criminal violations by undocumented Guilford County inmates flagged by ICE for removal included at least three charges of felony assault with a deadly weapon, according to ICE immigration detainers from Oct. 29, 2016 through March 2, 2017 that were obtained by TCB.

In a couple cases, Secor said, shift commanders at Guilford County jails have held inmates beyond their legal release date to allow ICE to pick them up in violation of the sheriff’s office policy. He added that shift commanders might have been confused because ICE has started sending a document called an “administrative arrest warrant” with the detainer and they mistakenly believed they were obligated to comply. But the administrative arrest warrants, like detainers, are only signed by an ICE agent and don’t hold legal weight, he said.

In October 2015, the Guilford County Sheriff’s hosted McCrory’s signing ceremony for HB 318, which outlawed so-called sanctuary cities in North Carolina while barring some governmental agencies from recognizing nonprofit-issued ID — a none-too-subtle jab at the local nonprofit FaithAction, which issues IDs to create trust between immigrants and local law enforcement including the Greensboro and Winston-Salem police departments.

Gov. McCrory said during the signing ceremony for HB 318 that sanctuary cities represented a “breakdown” of order and were “contrary to the oath every law enforcement officer and elected official” took “to uphold the Constitution.”

Only weeks after Barnes hosted Gov. McCrory for the signing of HB 318 at the Guilford County Sheriff’s Office, ICE attempted to persuade the agency to relax its policy on immigration detainers, according to Sheriff’s Attorney Jim Secor, but Sheriff Barnes held firm.

“We met briefly with the sheriff in advance of the meeting with ICE and the decision was to stick to the policy as articulated by Matt Mason,” Secor recalled in a December 2016 email. “The meeting with ICE was postponed but never rescheduled.”

Barnes told TCB that regardless of his personal feelings about immigration, his oath to uphold the Constitution requires that he adheres to the law.

“There are 11-, 12-, 13 million people here illegally,” he said. “I’m very pragmatic. We’re not going to be able to get all those folks out of the country. There’s not enough law enforcement. We would have to stretch the law to get all of them out, and I’m not willing to do that. I don’t know that they’re going to be able to do anything without a law being changed. The detainer is signed by an ICE agent; that is not a judicial order. I need a criminal paper. I made that very clear to them.”

“I don’t have the manpower to be doing my job and ICE’s job, too,” Barnes said in an interview.

Forsyth County Sheriff Bill Schatzman said in late January that he was not considering entering into a 287(g) agreement with Homeland Security.

The Guilford County Sheriff’s Office previously maintained a 287(g) agreement from 2009 to 2012, but Barnes said the purpose was only to access ICE’s database of immigration offenders. Once a program called Secure Communities was expanded to all 50 states with universal access to the database, he no longer saw a need for the agreement.

The relationship between Sheriff Barnes and ICE hasn’t always been smooth.

“I did butt heads with ICE,” Barnes said. “It was not over who was in charge; it was over whether what they were doing was Constitutional,” Barnes said. “We had some discussions with that, and the answers they gave were not satisfactory to me. It had to do with a joint task force that we were working together.”

*Great.*  How do we win this fight if the cops can’t even work together? (It sounds like the sheriff’s lawyer is the problem here.  Want to gum up a process?  Put a lawyer or two in the middle of it.) 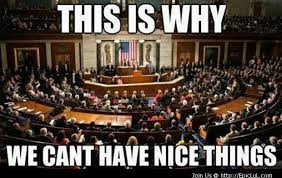 If these people are here in this country, without proper documentation, they are violating the law.  It is not Barnes’s prerogative to assign them the same constitutional protections you or I — as American citizens — enjoy.  It IS his job to apprehend lawbreakers so the justice system can deal with them.

Can you imagine what would happen to one of US, if we told the cops we weren’t going to cooperate?   I am sure Barnes and his team are more than willing to cooperate with DEA or ATF or the NC Department of Revenue on those property seizures and “drug taxes”  against American citizens which are truly of questionable constitutionality.

Perhaps it’s time for state and federal authorities to sit down and work something out to ensure our immigration laws are being properly enforced.  Or perhaps its time Guilford County lose a little federal funding until it understands the importance of protecting our borders and citizenry from undocumented criminality.

7 thoughts on “What’s up with BJ Barnes?”