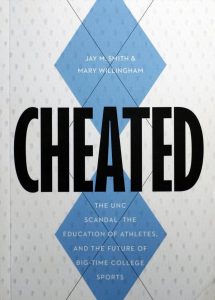 to — and “starving” of — education, add this story to your collection of rebuttal evidence to hit them with:

A UNC-Chapel Hill course on big-time college sports was canceled for the coming year, records show, after administrative angst and an offer by UNC’s athletic director to teach the class instead of an outspoken professor.

The course, “Big-Time College Sports and the Rights of Athletes, 1956 to the present,” was taught last summer and fall by history professor Jay Smith, whose expertise is in French and European history.Smith developed the sports course after co-writing “Cheated,” a 2015 book that chronicles UNC’s long-running scandal involving “paper classes” that never met and disproportionately benefited athletes.[…]

First of all, this smells like a cheap attempt to help spike sales of his book.  What do you want to bet that his book is the required textbook for the course?

It used to drive me crazy when that happened during my undergrad years.  Though, I often gave it a pass if the professor actually had some academic credibility on the subject.  THIS GUY is an expert in French and European history.

As an adjunct instructor on a number of campuses, I know that you are required to have a specific amount of graduate course time in the subjects you teach.  How does THIS GUY — an expert on French and European history — qualify to teach something like this?

Smith’s History 383 course got overwhelmingly positive student reviews. But it was kept off the schedule for the coming academic year. That prompted a letter of protest signed by 45 history faculty in April, calling the cancellation “a serious infringement of freedom of inquiry, a fundamental feature of intellectual life in every authentic university.”[…]

The amount of scrutiny on his course is unprecedented, Smith said. “I’m in my 27th year,” he said. “Never seen anything like it.”

Brundage, in his fourth year as chairman, said he’d never had this much discussion about the scheduling of a course.

“We are ultimately dependent on the broader university administration,” Brundage said. “No department wants to be in a situation in which they’re at loggerheads with an administration. There are very high risks.”

Such attention may be more uncomfortable for humanities departments that already face declining enrollments as students flock to science and technology majors.

Brundage is confident Smith’s class will be scheduled a year from now. Smith isn’t.

“There is some very strong pressure emanating from somewhere to keep this course off the books, to suppress discussion of these issues,” Smith said.

There is the question of academic freedom, he said, but also about UNC’s recovery.

“I’m concerned about what this says about what the university has learned from our scandal,” Smith said. “Because if we’re not yet willing to examine our recent history critically with an open mind, and with a willingness to situate that history within broader patterns of intercollegiate sport and the politics of higher education, then that means we haven’t really taken any substantive lessons from our scandal, that we’re just managing perception.”

Smith’s history colleague, Harry Watson, signed the letter of protest and was part of a small group that met with Guskiewicz on Tuesday.

“Our concern is that the course attracted attention because it had the possibility of disseminating unpopular opinion or information, and that the university thought it would be embarrassing for that reason,” Watson said.

Now, Watson and others will be watching closely to see if History 383 appears in 2018.

“Our satisfaction will come when the course is offered again.”

This course is all about promoting this guy and his book.  There is no real value to students.  Nothing to aid and abet their successful entry into — and advancement through — the workforce.

Declining enrollments in the humanities?  Maybe folks are finally seeing the limited to non-existent job opportunities for graduates with African Studies or Women’s Studies or Queer Studies degrees.

Is the university truly obligated to subsidize and provide classroom time for every professor with a bug up their tenured craw?