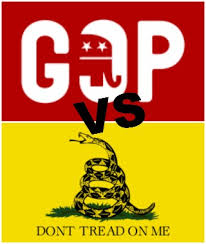 Are you frustrated with the current state of the NCGOP?  Start organizing your like-minded friends to take over — or at least build a sizeable contingent within — your precinct and your county party organization.  The county party organization makes the decisions about who goes to the state convention.  That’s where the platform AND the party chairman are decided on.  He who shows up, wins.  That’s how it works.

Frustrated with your US senator or congress-critter?  Start beating the bushes for a suitable candidate NOW.  It takes a lot of money — at least $250,000 — to run a credible campaign for the US House (especially against an incumbent).  It takes time to build name ID throughout a congressional district.  You need someone who will generally be respected in large swaths of your district. You also need to find someone people feel comfortable hosting fundraisers for or cutting big checks for. Look for someone who has a record of actually doing what he/ she says they are going to do.  Someone who has actually won an election previously by doing JUST THAT would be an extra-special bonus.

Good communication skills are a plus.  We live in a society where how you look and sound means A LOT.  Think The Bachelor, American Idol and Dancing With The Stars.  That is why you see lawyers, preachers, and funeral directors doing so well in politics.  Their business success hinges on being able to communicate effectively and positively influence people.  Former media personalities are an option to consider.  John Edwards succeeded in 1998 thanks to his courtroom-enhanced silver tongue and the fact women found him attractive.  Jesse Helms wasn’t exactly a sex symbol.  But he was a television commentator on one of the most-watched TV newscasts in North Carolina.  That helped him develop name ID across a good chunk of the state. His professional success in TV depended on his being able to communicate effectively on-camera.  Helms was able to cultivate those two factors into a successful 30 year US Senate career.

Settle on a champion as early as possible.  I’ve seen far too many lousy establishment types win because the conservative anti-establishment couldn’t unite behind a candidate (Renee Ellmers 2012, Thom Tillis 2014).  One establishment type against FIVE Tea Party types tends not to work out well for those of us in the counter-establishment.

Who can raise the money?  Who can earn the most respect district-wide or state-wide? Who is more likely to stand by his or her campaign rhetoric once sworn in to office? Who has the least amount of campaign-killing skeletons in their closet?

Start cultivating a reason for people to make a change.  Americans tend to get comfortable with the familiar. They tend not to pay much attention to the nuts-and-bolts of politics and governing, but they do remember who their girl or guy is.  There are a lot of good blogs out there that provide ammunition for making the case for changing your politicians. (We do it especially well here.)

People who market products know that they have to present a credible case for consumers to abandon the product or service they currently use for another option. How will this new option make my life better?  How will it make things more comfortable and stress-free for me? How will this new candidate make things better for my city / county / state / country than the current candidate?

It’s easy to sit back and gripe — to occasionally post anonymously on blogs.  That gives you temporary satisfaction, but it doesn’t do a whole lot to effect real change.  Start doing your part.  Share information that you obtain from blogs like ours.  (Information is power.  Why do you think dictatorships take such great pains to clamp down on the media?)  Go to work locally on gaining significant influence within your local party organization.  Start looking around for suitable, like-minded candidates.  (Make folks like us aware of these people so we can start getting the word around about them.)

If you are serious about changing things, you NEED to get to work NOW.