The Round Rev and his sidekick, former NC NAACP president and current Rocky Mount city councilman Andre Knight, are targeting the latest threat to the American fabric: high school girls in Nash County:

The Rocky Mount Branch of the NAACP has scheduled a Town Hall meeting at 7 p.m. Monday in the OIC Auditorium to discuss the recent KKK-inspired photograph that was posted on the social media website Instagram by six female Nash Central High School students. 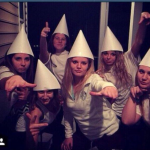 The Rev. Dr. William Barber, president of the N.C. NAACP, will lead the discussion at the meeting.

“The NAACP has heard the cries of children, parents and the community about the light manner in which the offensive Instagram posting initiated by Nash Central students has been taken by the Nash-Rocky Mount Public Schools,” said Rocky Mount branch President Andre Knight. “This forum is designed to do what Superintendent Anthony Jackson has asked the community to do: ‘Help our students get through the stuff by being honest with them and most of all, showing them by our actions how to resolve conflict resolution appropriately.’”

Andre Knight?  Yeah.  That’s the city councilman who attacked a white local businessman as ‘racist’ for daring to oppose a proposed taxpayer-funded “events center” in Rocky Mount.  A real open-minded, rational guy. (Here are more of the sordid details on that deal.) MORE:

The photo was posted on Instagram over the school district’s Thanksgiving break in the wake of a grand jury’s decision not to indict Ferguson, Mo., police officer Darren Wilson in the shooting death of unarmed black teenager Michael Brown. In it, the unidentified studen 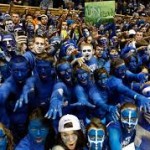 ts dressed in white and wearing white, cone-shaped hats reminiscent of Ku Klux Klan costumes are seen pointing their fingers in the shape of guns toward the camera. 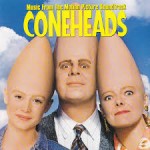 ?  Guns?  It looks like the SAME hand-signals regularly used by The Cameron Crazies.  ===>

And “reminiscent of Ku Klux Klan costumes”?  Really?  They make me think of the SNL classic Coneheads sketch, kids’ birthday hats, and the Jack-in-the-Box fast food chain.  Are THEY all in on the racist conspiracy?  MORE: 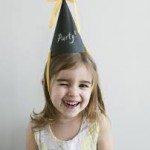 Knight said Jackson initially told him the matter was going to be handled internally until the NAACP publicly called on Nash-Rocky Mount Public Schools officials to make a strong public statement repudiating the photo and take action against the students.

Jackson responded by releasing a statement on behalf of the school system and the Nash-Rocky Mount Board of Education that stated, “We do not condone any behavior that is demeaning, disrespectful or discriminatory against any group based on race, gender or sexual orientation.”

But Jackson has declined to say what, if any, disciplinary action has been taken against the students, citing the school district’s policy requiring the confidentiality of student records.

“We are receiving numerous complaints from students and their families that black children are being disciplined if they even mention the incident, while these young girls who posted clear images of the worst expression of hate in our country have received protection from the schools,” Knight said. “If this is true, this is the time to openly and publicly discuss what has and is taking place.”

Knight said the NAACP is extending to school board members, Jackson school administrators, school staff and all Nash-Rocky Mount students and their parents an invitation to attend the meeting.

“It is clear throughout numerous examples that we see in the media and in attitudes from many everyday citizens that racial intolerance is becoming socially acceptable again,” Knight said. “The NAACP was created to address that attitude and end the acts of violence and discrimination that come as a result.

“Clearly, our job is not done.”

Exactly.  If everyone was happy and getting along, who would need YOU ?????  MORE:

Knight said he hopes the meeting can begin the process for achieving the type of “teachable moment” Jackson has called for in his comments about the incident to put into perspective “the seriousness of the error of tolerance toward hate groups like the Ku Klux Klan that have an active, violent and widespread presence in America” and in the Twin Counties.

The Klan’s “active, violent, and widespread presence” ?  Really?  When is the last time you laid your eyes on Klansmen?  Were they burning stuff down and vandalizing things and assaulting people in Ferguson, Missouri? Nope. THAT was Barber and Knight’s crowd.

“We will embrace the young girls and their families who initiated this offense if they are willing to publicly step forward and offer sincere apologies to the entire community,” he said. “If not, we will discuss the next steps that our leader, the Rev. Dr. Barber, will ask us to take.”

Embrace?  There are reports that the girls are having to be escorted to classes for their own safety, and are receiving death threats.

If posting stupid pictures on Facebook, Twitter or Instagram are now crimes punishable by the PC lynch mob,  a hell of a lot of people now have bull’s eyes painted on them. We are talking about high school girls, here.  Anybody see this movie or this one?

Welcome to Obama’s post-racial America.  Brace yourselves.  The next two years — at least — will be spent denying claims by Barber, Knight, the Chapel Hill-Carrboro crowd, et al,  that YOU are a racist.  Guilty until proven innocent.

7 thoughts on “Quoth the race pimps: Got a pointy-head? A pointy hat? You’re RACIST.”