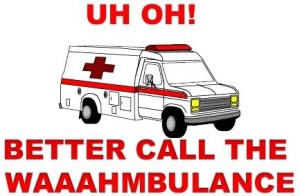 The N&O chronicles the movie industry crybabies as they pack up to leave North Carolina in the wake of a state decision to trim and streamline benefits for filming in the state:

But this past April, “Homeland” announced it would move production to South Africa after spending its first three seasons here in North Carolina, where Claire Danes has become as popular as Cam Newton.

So in May, Verch exited stage left, taking work in Georgia on AMC’s “The Walking Dead” that will keep her employed through November.

“I ended up taking that (job) … because everything was up in the air with the film incentives in North Carolina,” said Verch, 30, by phone last week during a break in shooting near Atlanta. “I wanted to stay there. My family’s there; my friends are there. That’s where I want to be. But I have to go where the paycheck is.”

Many of her peers in North Carolina’s film and video production industry are biting their nails and contemplating similar moves as the end of the state’s current film incentive program – responsible for luring TV series like “Homeland” and movies like “The Hunger Games” – looms on the near horizon.[…]

We’re supposed to feel sympathetic for people who have been taking our money for years while keeping one eye on other states who might give them ONE MORE DOLLAR in freebies?

It was great for politicians to be able to brag to their folks back home that movie stars will soon be hanging around town, but there were not too many real benefits for the rest of us who have been footing the bill.  The General Assembly’s Fiscal Research Division issued an analysis of the film incentives that has gotten little coverage by the drive-by media:

For the 2011 tax year, in which $30.3 million in Film Credits were claimed, the key impacts

I’d rather have one of those tax cuts than Will Ferrell hanging around town blocking traffic.

The fiscal analysis continued to note that the $30.3 million produced $2 million in personal income and $7million worth of “output.”  Between 2007 and 2010, the millions in film credits brought 20 to 30 new jobs to the state each year.

The legislative analysis found that an across-the-board tax cut equal to what was given to the movie people would have brought 370 to 450 new jobs, $21 million in personal income, and $54 million in output.

I’ve got friends in the Southport area who tell me that filming has gotten them little more than road blocks and noise.  The movie companies import their catering and do very little, if any, local business.  If they’re going to demand our money, they ought to try to give us something back in return.

Why are we bribing people like this to stay here, when we have so many other people who have been committed to North Carolina for years and plan to stay here?  Lighten the burden for everyone, and you might surprise yourselves at the results.