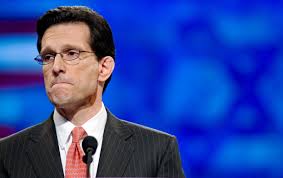 The seismometers were going wild around Richmond, Virginia tonight.  A political earthquake appears to have catapulted the House Majority Leader into those very crowded unemployment lines:

The Associated Press called the race for Cantor about an hour after polls closed at 7 p.m. ET.

Cantor is the second-most powerful member of the U.S. House and was widely seen as the  next in line to succeed House Speaker John Boehner.

Cantor’s loss to a political novice with little money marks a huge victory for the Tea Party movement, which supported Cantor just a few years ago.

Brat had been a thorn in Cantor’s side on the campaign, casting the congressman as a Washington insider who isn’t conservative enough. His message apparently scored well with voters in the 7th District.

“There needs to be a change,” said Joe Mullins, who voted in Chesterfield County Tuesday. The engineering company employee said he has friends who tried to arrange town hall meetings with Cantor, who declined their invitations.

It’s probably because Cantor was so busy meddling in primaries in other states.  Cantor and his PACs have been active in Renee Ellmers’ races here in North Carolina.  They basically purchased the 8th district’s  Richard Hudson in 2012, and 7th district nominee David Rouzer this year.  MORE:

Tiffs between the GOP’s establishment and Tea Party factions have flared in Virginia since Tea Party favorite Ken Cuccinelli lost last year’s gubernatorial race. Cantor supporters have met with stiff resistance in trying to wrest control of the state party away from Tea party enthusiasts, including in the Cantor’s home district.

Brat teaches at Randolph-Macon College, a small liberal arts school north of Richmond. He raised just more than $200,000 for his campaign, according to the most recent campaign finance reports.

Beltway-based groups also spent heavily in the race. The American Chemistry Council, whose members include many blue chip companies, spent more than $300,000 on TV ads promoting Cantor. It’s the group’s only independent expenditure so far this election year. Political arms of the American College of Radiology, the National Rifle Association and the National Association of Realtors had five-figure independent spending to promote Cantor. […]

See? You tick off your base enough, and NO amount of money will save you.  (Pay attention, Thom.)  MORE:

[…] Brat offset the cash disadvantage with endorsements from conservative activists like radio host Laura Ingraham, and with help from local Tea Party activists angry at Cantor. 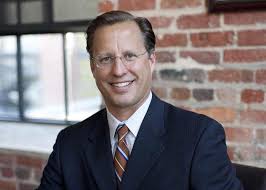 Much of the campaign centered on immigration, where critics on both sides have recently taken aim at Cantor.

Brat has accused the House majority leader of being a top cheerleader for “amnesty” for immigrants in the U.S. illegally. Cantor has responded forcefully by boasting in mailers of blocking Senate plans “to give illegal aliens amnesty.”

It was a change in tone for Cantor, who has repeatedly voiced support for giving citizenship to certain immigrants brought illegally to the country as children. Cantor and House GOP leaders have advocated a step-by-step approach rather than the comprehensive bill backed by the Senate. They’ve made no move to bring legislation to a vote and appear increasingly unlikely to act this year.

Cantor, a former state legislator, was elected to Congress in 2000. He became majority leader in 2011.

The final margin appears to have been in the neighborhood of 56-44.  Not even close.

Tea Party event here.  This guy and his organization were clearly polished, professional, and organized.  We’ve got a lot of frustrated, angry folks here in North Carolina but have no vehicle for channeling those feelings into positive change.  Tea Partiers here in the Tar Heel State can learn a hell of a lot from studying the work of Team Brat in Virginia.