In 1988, as a wide-eyed, bushy-tailed College Republican, I was marching along with the Bush For President bandwagon. 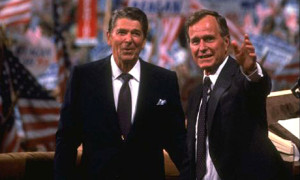 He had been my hero’s right-hand man for eight years.  Surely, he’d give us more of the same. Right?  (um, right?)

By 1992, I found myself within the inner circle of the Buchanan for President insurgency.  Our champion scared the hell out of the GOPe types and helped remind the Reagan coalition how far the GOP had fallen from what they had fought for in 1980.

Coupling that with a stint in DC with US Senator Jesse Helms, it was a grand start to my life’s work as a Right-wing rebel with a cause. 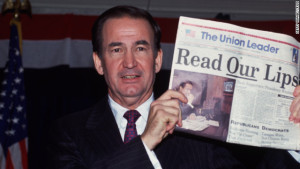 A recent essay in The Week talks about how a fellow Buchananite from the early 90s predicted THEN what has become the Trump PHENOMENON:

[S]ooner or later, as the globalist elites seek to drag the country into conflicts and global commitments, preside over the economic pastoralization of the United States, manage the delegitimization of our own culture, and the dispossession of our people, and disregard or diminish our national interests and national sovereignty, a nationalist reaction is almost inevitable and will probably assume populist form when it arrives. The sooner it comes, the better… [Samuel Francis in Chronicles]

Imagine giving this advice to a Republican presidential candidate: What if you stopped calling yourself a conservative and instead just promised to make America great again?

What if you dropped all this leftover 19th-century piety about the free market and promised to fight the elites who were selling out American jobs? What if you just stopped talking about reforming Medicare and Social Security and instead said that the elites were failing to deliver better health care at a reasonable price? What if, instead of vainly talking about restoring the place of religion in society — something that appeals only to a narrow slice of Middle America — you simply promised to restore the Middle American core — the economic and cultural losers of globalization — to their rightful place in America? What if you said you would restore them as the chief clients of the American state under your watch, being mindful of their interests when regulating the economy or negotiating trade deals?

That’s pretty much the advice that columnist Samuel Francis gave to Pat Buchanan in a 1996 essay, “From Household to Nation,” in Chronicles

magazine. Samuel Francis was a paleo-conservative intellectual who died in 2005. Earlier in his career he helped Senator East of North Carolina oppose the Martin Luther King holiday. He wrote a white paper recommending the Reagan White House use its law enforcement powers to break up and harass left-wing groups. He was an intellectual disciple of James Burnham’s political realism, and Francis’ political analysis always had a residue of Burnham’s Marxist sociology about it. He argued that the political right needed to stop playing defense — the globalist left won the political and cultural war a long time ago — and should instead adopt the insurgent strategy of communist intellectual Antonio Gramsci.[…]  Buchanan didn’t take Francis’ advice in 1996, not entirely. But 20 years later, “From Household to Nation,” reads like a political manifesto from which the Trump campaign springs.

To simplify Francis’ theory: There are a number of Americans who are losers from a process of economic globalization that enriches a transnational global elite. These Middle Americans see jobs disappearing to Asia and increased competition from immigrants. Most of them feel threatened by cultural liberalism, at least the type that sees Middle Americans as loathsome white bigots. But they are also threatened by conservatives who would take away their Medicare, hand their Social Security earnings to fund-managers in Connecticut, and cut off their unemployment too. […]

Rush hit the nail on the head when talking about Trump a few days ago.  Much of the conservative intelligentsia has picked apart statements from The Donald over the years

that appear to call to question his commitment to conservatism.  *Never mind the mealy-mouthed shenanigans of the crew we sent to DC in 2010 with a mission to shrink our government and return power to the people of fly-over country.*

Rush’s point was this:  People are not necessarily drawn to a Trumpian philosophy.  Our nation is a mess.  We are drowning in debt and being overrun with poverty-stricken Third World refugees ready to work for pennies and accept social services.  Politicians — even Republicans — are spinning that things are great.  But people are seeing through that.   Someone — Donald Trump — has come along saying what they’ve been saying — DC is screwed up — and promising to UN-screw it.  While the GOPe rambles on about “fixing” immigration policy, Trump and the great silent majority are demanding some actual immigration law enforcement.

My heart is with Ted Cruz.  But I would certainly have no heartburn over some variation of a Trump-Cruz ticket.   (I agree with Rush and Mark Levin that this current sniping between Cruz and Trump is no good for conservatives. There is actual data out there showing that a Trump-Cruz alliance would blow anything or anyone that got in its way out of the water.  Bush and Reagan patched things up in 1980.  Perhaps there is some hope for these two.)

The pitchfork and torches crowd is alive and well here in flyover country.  Trump is personifying their frustration — their anger. (Just like Pat Buchanan in 1992 personified my frustration over George Bush’s clear betrayal and trashing of the Reagan legacy.)   ANYONE preaching anything less than storming the barricades this election year stands a real good chance of getting RUN OVER.  Bragging that you got some swell committee assignments from Paul Ryan or Mitch McConnell is not going to cut it this year.

[…] We have been given a 2016 circus the Republican Party and the DC establishment has made. Donald Trump is normalizing and mainstreaming F-you politics – the same phenomenon that is driving Bernie Sanders, too. The expression of the voter in 2016 is: “Why pretend that we give a s—t when the ruling class doesn’t give a s—t about us?” As Tim Carney has put it: they could have become the party of Toomeys and Lees and refused; then they had a choice to be a party of Cruzes and refused again; now it’s Trump and they may not have a choice. In the parlance of Fallout, the Republicans have turned ghoul – but they may or may not be feral. They have overestimated the principled conservatism of the base.http://vlt.tc/28tq  And now their voters are coming to eat them, pitchforks in hand, just as Pat [Buchanan]  predicted.