The crash and subsequent burning of Jeb! has resulted in a GOPe stampede over to the campaign of Florida senator Marco Rubio.  The guy has been racking up all kinds of 3rd, 4th, and 5th place finishes.  But THAT has not stopped all of the electeds in primary states to pledge allegiance to the junior senator from Florida.  (His neck-and-neck with Ted Cruz right behind DJT in South Carolina was, in large part, due to all the elected GOPe — from Nikki Haley on down — taking the Marco pledge.  Mark Sanford was an exception.  I think Lindsey Grahamnesty was too.  He backed Bush and then Kasich.)

Now comes word that  Susan Tillis’s husband has fallen under the seductive spell of Señor Marco: 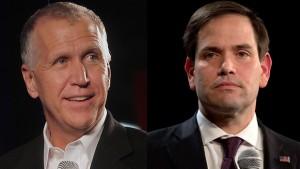 The backing by Tillis also comes three weeks before North Carolina holds its own primary on the same day as four other states, including Rubio’s home state, Florida. North Carolina GOP activists, however, chose to distribute its delegates proportionally based on the primary vote, rather than a winner-take-all competition. But North Carolina, the 9th largest state by population and whose voters narrowly chose Mitt Romney in the 2012 general election and Barack Obama in 2008, remains a key state.

In a statement from Rubio’s campaign, Tillis mentioned each of their “humble beginnings.” During his 2014 campaign, Tillis talked about growing up in a poor family, and working in a warehouse and living in a trailer park at age 20. He ultimately graduated from college in his mid-30s and became a business consultant before entering politics. He and Rubio, the son of Cuban immigrants, are both first-term senators and former state House speakers.

“Marco lived the American Dream, and he will ensure that each and every one of us can do the same,” Tillis said in the statement, adding Rubio “has the unique capability of drawing new people into the party, which is critically important in a swing state like North Carolina.” […] 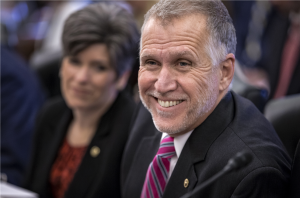 This makes sense.  Thom Thillis is quite used to doing what Mitch McConnell and the RNC tell him to do.  He probably polled this.  There’s a good chance cash changed hands (always a sure-fire way to win Thom’s blessing). All his buddies — Jason Saine, Andrew Brock & co. — are already with Rubio.

They both have strong ties to Florida.   Rubio and Thillis are also seatmates on the amnesty bandwagon.  Thom pledged his fealty to the Farm Bureau during the campaign, while Rubio kissed Chuck Schumer’s ring on that whole Gang of Eight thing.