It killed Marco Rubio’s presidential ambitions.  The GOP base doesn’t want it.  But so many of the “smart” people in DC, on both sides of the aisle, are ready to sock it to us with amnesty.

We had ThomT pegged as an amnesty man early on.  He denied it throughout the 2014 campaign.  Kept babbling about “comprehensive immigration reform” which — he said — was not the same as amnesty.  But the Chamber of Commerce and the Farm Bureau kept dumping checks on him. They knew better.  (And that’s the way to get Thilli$$$$ to pay attention — wave a big fat check in front of him, kind of like how you dangle string in front of a kitten.)

Lindsey Graham doesn’t sugarcoat his prediction: Republicans are going to get thrashed in the November election, especially among Latinos. And it’s going to trigger another run at immigration reform in Congress next year, the South Carolina senator says. 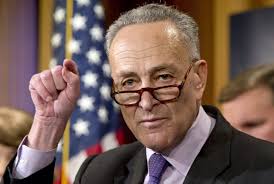 “I’ll tell you what I’m going to do in 2017,” the plainspoken GOP deal maker said in a recent interview. “I’m going to take the Gang of Eight bill out, dust it off and ask anybody and everybody who wants to work with me to make it better to do so.”

[…]   Republicans are also under increasing pressure to act. Several GOP senators from Latino-heavy states — such as David Perdue of Georgia and Thom Tillis of North Carolina — were elected in 2014 and are eager to dig into the issue.

To all of you folks who said we had to DEFEAT HAGAN:  She would have been doing exactly THIS if she had been reelected.  MORE:

[…] And Tillis has already worked during his short time in Congress to bolster visas for the seafood industry, a big presence his coastal state. As for those already here illegally, Tillis said population needs to be addressed after criminals are deported and steps are taken to control the border, such as the construction of a “virtual wall” with drones and sensors.

“These are ways to actually build on those successes and then have a dialogue about dealing with the illegally present,” Tillis said. “Under no circumstances should anyone be led to believe that that is just blanket amnesty.”[…]

Question for Thilli$$$$:  You speak about deporting “criminals” and dealing with the rest later. If none of these people have gone through the proper immigration channels, aren’t they ALL criminals?