Oh, the butt hurt is 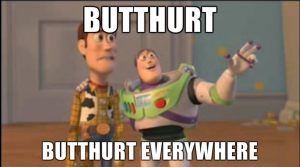 epidemic the day after President Trump picks Judge Neil Gorsuch as his first nominee to the US Supreme Court.  (Some of you long-time political junkies may remember Gorsuch’s mother, Anne Gorsuch Burford, who served as Reagan’s EPA administrator.)

We’re getting all kinds of babbling from the riot-in-the-streets-and-set-stuff-afire Left, as well as from the driveby media and elected Democrats, about how the Republicans stole this from Obama.  (Imagine how much these people would get away with if there were no Internet — no Google – to revive what they said and did in the past.)

Here’s Joe Biden (you remember him) in 1992 taking a stand on Supreme Court nominations during an election year:

[…] Comments made by Vice President Joe Biden in 1992, which resurfaced Monday on the Internet, handed Republicans new ammunition in the fight over whether to fill a Supreme Court vacancy during an election year. 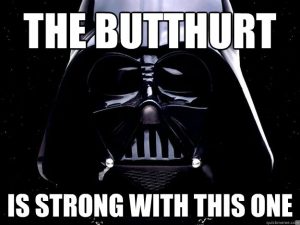 Mr. Biden, then the Senate Judiciary Committee Chairman, said in a speech on the Senate floor in late June 1992 that President George H.W. Bush should consider not naming a replacement during the election year if a Supreme Court justice were to resign. If the Republican president were to submit a nominee, Mr. Biden also said that the Democratic-controlled Senate “should seriously consider not scheduling confirmation hearings on the nomination until after the political campaign season is over.”

Mr. Biden’s remarks echo many Republicans’ arguments that President Barack Obama shouldn’t submit a nominee to replace Supreme Court Justice Antonin Scalia, who died on Feb. 13. Many Senate Republicans have said Mr. Scalia’s replacement — which could tilt the high court’s balance of power — should be left to the next president to choose after the November elections. And many Republicans have argued, as Mr. Biden suggested, that the Senate Judiciary Committee shouldn’t hold confirmation hearings on any nominee.[..]

Obama and Biden put forth Judge Merrick Garland in 2016 to try and stack the court before they left town.  Republicans simply took Biden’s advice from 1992.

The howling, growling, drooling Left says they will remember the treatment afforded Garland, and push to have the favor returned to Gorsuch.

3 thoughts on “The smell of butthurt in the morning: About that “stolen” Supreme Court seat”