What IS a Republican?  Is it merely someone who marks an ‘R’ on their voter registration card? Is it someone who seeks

to protect the common people from the excesses of government bureaucracy?

THAT is a question that has been debated ferociously for decades on end.  In 1856 and 1860, at its formation, the GOP offered itself to the voters as a party of property rights, individual freedom, and states’ rights (except for secession).

In the 1930s and 40s,  Republicans led by senator Robert Taft (R-OH) knocked heads with those led by NY Gov. Thomas Dewey (R) over charting the ideological course of the GOP.    Taft was the leading opponent of FDR’s New Deal in Washington and was a key player in efforts to limit the power of labor unions in the wake of FDR’s death.   Dewey and his group supported a lot of The New Deal, the formation of the United Nations, and all kinds of military interventions in the early days of The Cold War.

In the 50s and 60s, you had Richard Nixon and Barry Goldwater — both from out west — battling the GOPe forces of New York governor Nelson Rockefeller.  In the 1964 preside 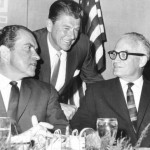 ntial race,  things came to a head between Rockefeller and Goldwater in the GOP primary.  Goldwater edged out Rockefeller in a vicious primary fight.  In the end, instead of showing that “party unity” that regularly is demanded of conservatives, the GOPe forces supporting Rockefeller started forming “Republicans for Johnson” groups and endorsing the reelection of the appointed Democrat incumbent.

In the 1960s and 70s, you had former actor and California governor Ronald Reagan slugging it out with establishment types like Gerald Ford and Bob Dole and Richard Nixon.  Reagan lost a primary fight in 1968.  Nixon slipped into office in 1968 campaigning as a conservative, but took a good hard left turn once sworn in.  In 1972, Nixon was saved by the rise of the hippies and George McGovern.  In 1974, thanks to VP Spiro Agnew’s corruption and subsequent resignation, and a little thing called Watergate, moderate Michigan congressman Gerald Ford 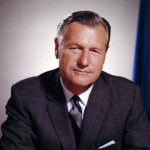 found himself to be the first appointed VP and president in American history.

Down South, the 1964 Goldwater-Johnson race was having an impact.  South Carolina’s Strom Thurmond switched to the GOP.  In 1972, a North Carolina TV commentator named Jesse Helms registered Republican and became the state’s first GOP senator since Reconstruction.  That same year, a little-known state legislator named Jim Holshouser — offered up as a sacrificial lamb in a then-diehard Democrat state — slipped into the governor’s mansion thanks to Nixon’s overwhelming victory against McGovern and a vicious Democrat Party gubernatorial primary. 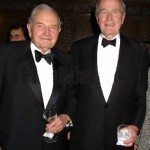 The Holshouser  and Helms forces slugged it out on the state level in a micro- version of the events going on nationally with the Republicans. In 1976, Holshouser supported Gerald Ford’s reelection.  The Helms forces backed Ronald Reagan’s primary challenge to Ford that year — even helping to deliver North Carolina to Reagan in that year’s GOP primary.  (The Helms team also succeeded in achieving a rarity –denying a sitting governor (Holshouser) a role at the national party convention.)

In 1980, the old GOPe vs. New Right clash heated up again.  Ronald Reagan was the GOP frontrunner, with establishment types lining up behind George H.W. Bush and liberal Republican congressman John Anderson of Illinois.  Reagan got the party nod, and took on Bush as his running mate in a gesture of party unity.  Anderson decided to make an — in the end — inconsequential third party run in the general election.

The meaning of “Republican” has been shaped and molded in different directions over the years. However, the party is in danger of making a mistake that kills many a product on store shelves — a lack of differentiation from the competition.  THAT is what killed off the Whig Party.  Prior to the formation of the GOP, the two 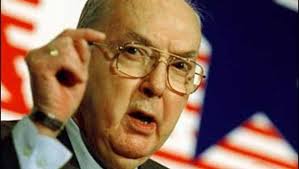 main national parties were the Democrats and The Whigs.  The ideological lines were so muddled that there were very few differences between the two — except for slavery.  Democrats were generally supportive, while Whigs were split on the issue. That split caused the Whigs to suffer at the ballot box.  Pro-slavery Whigs left to form something called The American Party, while anti-slavery Whigs formed the Republican Party.

The main point here?  Parties — like products on the store shelf — succeed when they offer a clear, concise, positive difference to their target audiences.  In North Carolina US Senate races, from 1972 through 1996, Jesse Helms won in overwhelmingly Democratic North Carolina by offering up a stark ideological difference between himself and his opponents.  People were — and still are — looking for more than the R and the D.   John East won in 1980 by painting a stark contrast with his opponent. In 1986, Jim Broyhill  lost a Senate race by thumbing his nose at conservatives and offering little toward making those Eastern Democrats cast their ballot for the R. In 1992, while George H.W. Bush was going down in flames, Democrat-turned-Republican offered the national GOP a rare win by painting himself as starkly more conservative than Terry Sanford.

In 2002, Elizabeth Dole campaigned as starkly more conservative than Erskine Bowles. In 2004, so did Richard Burr.  In 2008, there was very little differentiation and Kay Hagan sent Dole back to her condo in The Watergate. In 2014, Thom Tillis succeeded by championing a lot of conservative successes he fought to water down and kill while he was speaker of the state House.

Nationally, the GOP has lost two straight presidential races against Obama by offering up candidates who did not offer that much of a difference.  We’ve got three great choices in Donald Trump, Ted Cruz, and Ben Carson — three outsiders adequately preaching the anti-government gospel. Of course, we have folks like Bob Dole and Bill Kristol pouting about staying home and not voting if any of those three get the party nod.  Isn’t it funny how we’re bad when WE talk like that, but it’s apparently A-OK for them? 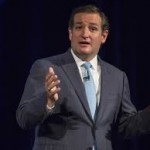 I’ve recently had some NCGOP celebs scold me for tossing the RINO term around.  “I don’t know how a newcomer can dare to describe someone who built the Republican Party in this state as a RINO.”  — sniffed one.

Until the early 1990s, the GOP was pretty much quarantined to small pockets around Greensboro, Charlotte, and  Asheville. It was quite the exclusive club.  The party grew – and started seeing a lot of its success — by convincing those conservatives who had been with the Democrat Party for decades and generations that their party had left them in the dust.  For some people, the R is all that matters.  But history confirms that a message of limited government and low taxes reaps the biggest and longest-lasting rewards for us all.

26 thoughts on “The RINO question”