It is amazing how the driveby media’s passion for fact-checking happened to blossom right as the GOP took over in Raleigh.  (I am suuuuuuuuuuure it’s just a coincidence.)

WRAL’s Binky has been at this “fact-checking” game for a little while now.  That’s kind of like having Stevie Wonder watch out for on-coming traffic as you back out of a driveway.

Now, The N&O — which has taken lying and screwing up to new heights (or lows, depending on how you look at it) — and Politifact, the national website which finds all Republicans to be filthy liars, are joining forces to wreak their special kind of havoc on the people of North Carolina.  That’s right.  We’re getting Politifact North Carolina, whether we want it or not.

at illustration of the damage Politifact has done to the concepts of communication, human decency, and democracy.   We all know about The N&O.  Founded as a propaganda organ to support the misdeeds of the KKK front that toppled the democratically-elected state government, the N&O now has the gall to lecture the rest of us about racial tolerance.

Their coverage of the late US senator Jesse Helms was 99.999999999 percent bullshit.  Let’s not forget the damage they and Ruth Sheehan did with their coverage of the Duke lacrosse case.   Or even Rob Christensen’s “failure” to notice the blonde with the camera while following John Edwards around the presidential campaign trail.

One thing that has been reinforced with me since starting this blog?  Lying is a bipartisan sport.  Rs and Ds do it with the same amount of vigor.  It needs to be called out when it is seen — as we so often do.

That’s what the First Amendment was initially all about.  Giving the people the power to keep their government in check.  Well, our media falls down on the job when they place access — or the desire for a higher paying political job — over their duty to their readers and fellow countrymen. 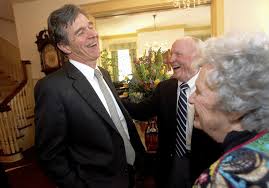 McClatchy is celebrating this “partnership”.  But I see it as simply one more nail in the coffin of agenda-driven drive by media.